This phone survey found that 55% of Polish respondents support a ban on fur farming, with support being higher among females.
FULL TEXT The full text of this article is available.
EXTERNAL STUDY This is a summary of an external study.
Summary By: Faunalytics | Published: August 22, 2014
Image by Flickr user Dzīvnieku brīvība

This report outlines a phone survey carried out about fur farming in Poland. 1102 participants who were selected to represent the general population, were randomly dialed by an automated dialer, and asked one question: “Do you think that Poland should ban breeding animals (such as minks, raccoon dogs, foxes) for fur?” Response results are broken down by gender, age, income and educational level, and the population of the locality where they resided. 70% of women and 55% of all respondents supported a ban on fur farming in Poland.

“According to the newest research, conducted by an opinion research institute Homo Homini (http://www.homohomini.com.pl/) on request of the Open Cages association, which has campaigned to ban fur farming in Poland since its founding in 2012, 55% of the society supports the ban on breeding animals such as minks, raccoon dogs or foxes for their fur.

The research was conducted early this year (2014) on randomly chosen respondents. It proved that among the opponents of fur farming, women are the majority – almost 70% of them is against it. The ban on fur farming in Poland is supported mostly by the young, in the age group of 18-35 years old. Almost 70% of this group supports the ban.

The opposition to fur farming among the villagers is fully justifiable. Fur farming in Poland mostly consists of large mink farms, mink being an invasive species. Although the farmers use modern precautions, the animals escape frequently. Presence of a large number of the animals belonging to an invasive species may cause many losses in farms and seriously disrupt the ecosystem.

The negative approach of the society towards the fur farming in Poland can be a significant factor when it comes to the efforts to include American minks and raccoon dogs in the list of invasive species, which the fur industry is opposing.” 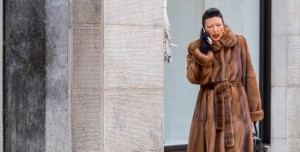