The fur farming industry, at it's root, is a system that contravenes animal welfare laws and may not be able to be reformed.
FULL TEXT The full text of this article is available.
Summary By: karol orzechowski | This is a summary of an external study | Published: January 18, 2016
Photo by Flickr user dzivniekubriviba 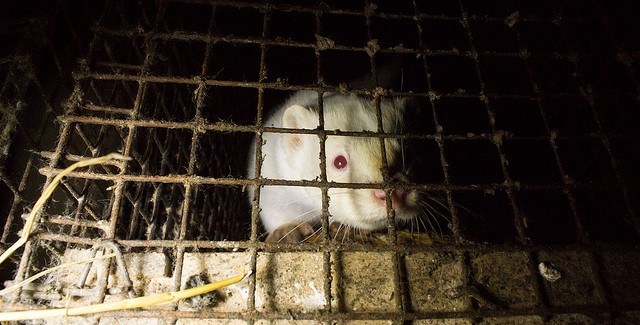 Fur farming is a cyclical industry, subject to the push and pull of the supply and demand of the fashion industry. According to this report on fur farming in the European Union (EU), worldwide estimates are that about 95 million foxes and mink were killed for their fur in 2014, largely due to growing demand in developing economies like China and Russia. Most fur sold around the world comes from farmed animals, with Europe and China acting as the major producers. In the EU, fur-bearing animals are included in general regulations around animal welfare, slaughter, and transport, but there are no species-specific provisions.

This is a unique problem because, unlike domesticated animals on most farms, fur-bearing animals are not domesticated. Although, according to the report, “experimentally, mink and silver foxes can be domesticated, this has not, and cannot, occur on fur farms because changes in the coat that are characteristic of domesticated animals are incompatible with the fur industry’s demands.” In other words, animals on fur farms in Europe have not been domesticated and have not adapted to contact with humans. This fact, combined with intensive confinement, has led to a general welfare condition that this report (and many animal advocates in Europe) describes as “extremely poor.”

European public opinion is generally opposed to fur farming, which has led the fur industry to create labels such as “Origin Assured.” This ensures that the fur comes from a particular source country, but it does nothing to describe welfare conditions. In 2009, the industry itself created a new project called “WelFur” to try to address the issue of welfare in fur production. However, there are serious problems with this program and its welfare scoring system, as this report describes. Namely, the project’s measures of welfare have been designed with the present intensive housing system in mind. The report says that these measures have been “designed around the very serious limitations” of the present system, and as such cannot truly challenge it. Furthermore, they note that WelFur measurements:

Do not adequately penalise practices that fail to meet existing minimum standards set out in the Council of Europe Recommendations; do not address inhumane handling and killing methods and the lack of training for all personnel carrying out killing of fur animals; downplay the importance of serious injuries that are associated with extreme suffering; use inadequate measures of hunger, human- animal relationships and positive mental states; and use complex scoring systems to combine different welfare measures into a single category indicating the overall welfare level, which may allow high scores on some elements to mask serious failings on others.

When you see just how much WelFur doesn’t measure, you start to wonder what exactly it does measure when it comes to mink and fox welfare.

In conclusion, the report notes that attempts to try to “improve” the industry have only described “best current practices” and not outside-the-cage thinking of how to improve conditions for fur-bearing animals in a more holistic way. This may be because, as the report notes, “alternative systems with the potential for higher levels of welfare do not exist for mink and foxes.” As such, the current regulatory framework for protecting animals in the EU is completely inadequate to be able to address fur-bearing animal welfare. “The use of undomesticated animals by the fur industry,” they say, “means that fear of humans and difficulties in handling and management … present insurmountable obstacles to the adoption of more extensive systems.” In their view, the system cannot be reformed adequately, and therefore needs to be tossed into the bin entirely.

Respect For Animals (2015). The Case Against Fur Factory Farming. Retrieved from the Respect For Animals Website: http://www.respectforanimals.co.uk/facts-and-reports/new-report-from-respect-for-animals-makes-case-for-ban-on-fur-farming-in-europe/663/