‘Nuisance Animals’ Thrive Despite Being Discriminated Against

Researchers review over 200 studies to reveal impressive cognitive capabilities of so-called 'nuisance' species.
FULL TEXT The full text of this article is available.
PEER REVIEWED This article has been peer reviewed.
EXTERNAL STUDY This is a summary of an external study.
Summary By: Lukas Jasiunas | Published: October 10, 2019
Photo by Quinten de Graaf on Unsplash

Although we’re seeing more and more animal cognition research focusing on how animals respond to new or changing environments, few shed light on how animals who share our urban living space fare. Despite many species being in decline, some species have found ways to thrive in human-altered habitats by taking advantage of new resources and opportunities. However, these same species are often in conflict with humans and often end up being seen as a “nuisance.”

In this study, a team of researchers reviewed numerous studies to shed light on the cognitive abilities of such animals.

To begin with, the scientists list a range of several qualities and mechanisms that reflect cognition, that help to survive, and that lead to interaction between such animals and humans:

Impressive cognitive abilities of urban animals are wide ranging and well-documented. From grey squirrels, notoriously skilled at getting into bird feeders, crows learning about dangerous humans and subsequently avoiding specific places and humans, to chimpanzees who have learned to look left and right before crossing busy roads – animal adaptation is nothing short of awe-striking. Such problem-solving abilities may at the very least partially explain some species’ success. Naturally, there are good reasons for animals to develop awareness and avoidance behaviors towards us.

In contrast to kleptoparasitism, some animals minimize their contact with humans or avoid us altogether. Strategies to achieve such solitude include increasing nocturnal activity and discriminative learning. Urban species have experienced many different control measures, most of which deliver pain, fear, and death by design. Sensitization is typically quickly developed via the sense of taste, with many species becoming ‘bait or trap shy.’

Indicative of human creativity, a wide range of human-wildlife conflict mitigation strategies, ranging from lethal control to non-lethal deterrents and structural exclusions, have already been employed. The researchers note that lethal methods may be ineffective or cause negative consequences on ecosystems, not to mention that they are increasingly less tolerated by the public. However, current non-lethal strategies are often overcome by animal cognition.

Since the success of non-lethal deterrents cannot be assured, the researchers urge for more studies on the behaviour and cognition of urban-dwelling species to better design and execute humane mitigation strategies. For example, the researchers note that recently, an innovative method of using garbage bins with built-in automated feeders that reward animals for the disposal of litter underwent a pilot program. Such innovative methods promote a more harmonious relationship between humans and other species in urban environments. Although empathy towards animals is often elicited by animals’ anthropogenic qualities, the same cognitive abilities may paradoxically predispose animals to be seen as ‘nuisance’ species by people.

The research group argues for continuous efforts in public education and human behavior modification with respect to wild animals. Meanwhile, making use of citizen science projects is suggested, to aid in resensitizing animals to humans, and helping people to understand and appreciate animal behaviour in urbanized areas. Animal advocates will appreciate that scientists seek to understand how animals adapt to anthropogenic change. Only knowledge can help raise empathy for these highly intelligent species that will likely continue to be treated as a nuisance in our future cities. 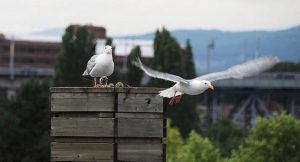 Bridging The Gap Between Conservation And Animal Welfare

Conservation advocates and welfare advocates are often at odds, but this paper looks at how they might be brought closer together for the benefit of both.

In this blog, we look at how focus, content, and framing work together to create the most effective animal advocacy campaigns.