Evaluating The Impacts Of Marine Debris On Cetaceans

Early research has shown that marine debris causes death from entanglement and ingestion in 58% of cetacean species but additional research should be undertaken to determine the conservation threat.
ABSTRACT ONLY Only an abstract of this article is available.
PEER REVIEWED This article has been peer reviewed.
EXTERNAL STUDY This is a summary of an external study.
Summary By: Faunalytics | Published: May 31, 2014
Image by Pixabay user janeb13

This review studies cetacean mortality due to marine debris, compiling previously published studies and reviews, and reports from strandings networks. Fatal ingestion of debris and deaths from entanglement (overwhelmingly by fishing gear) occur in 58% of cetacean species. Study sample sizes are often too small for accurate quantification, and a species can be differently impacted in different locations. Additional research should be undertaken to determine whether mortality in high-impact areas poses a conservation threat.

“Global in its distribution and pervading all levels of the water column, marine debris poses a serious threat to marine habitats and wildlife. For cetaceans, ingestion or entanglement in debris can cause chronic and acute injuries and increase pollutant loads, resulting in morbidity and mortality. However, knowledge of the severity of effects lags behind that for other species groups. This literature review examines the impacts of marine debris on cetaceans reported to date. It finds that ingestion of debris has been documented in 48 (56% of) cetacean species, with rates of ingestion as high as 31% in some populations. Debris-induced mortality rates of 0–22% of stranded animals were documented, suggesting that debris could be a significant conservation threat to some populations. We identify key data that need to be collected and published to improve understanding of the threat that marine debris poses to cetaceans.” 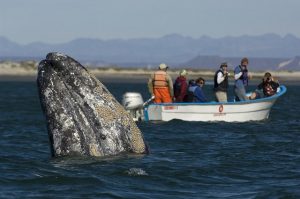