Dogs And The Secure Base Effect

Dogs don't just feel an attachment to us, they rely on us to provide a "secure base" from which they can explore the world around them.
FULL TEXT The full text of this article is available.
PEER REVIEWED This article has been peer reviewed.
Summary By: Jen Wyglinski | This is a summary of an external study | Published: July 1, 2016
Photo by Flickr user MandaVixen 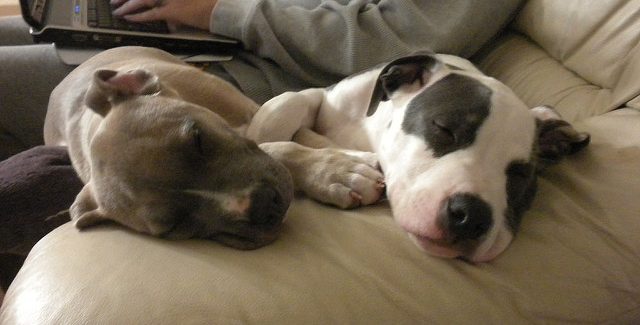 Bonds between people and companion animals are often compared to those between human adults and their children. This article, published in PLOS ONE, sought to investigate whether dogs become attached to their guardians in the same way that children become attached to primary caregivers through the secure base effect. That’s the phenomenon by which children are able to explore their environment without stress because they feel safe knowing that they can return to their caregiver, or secure base.

To test the importance of the secure base effect in dogs, the authors conducted two sets of experiments in which individual dogs were placed in a room with a toy filled with treats under varying conditions. The first experiment involved three trials in which the guardian (referred to in the article as the “owner”) was present but silent, present and encouraging the dog, or absent. The second experiment included one additional trial in which an unfamiliar person replaced the absent guardian. A researcher was also present in all trials.

In both experiments, the dogs spent more time manipulating the toys when their guardian were present than when they were absent. The authors found this to be the case regardless of whether the dogs were previously identified as having separation anxiety. Additionally, the second experiment found that the presence of an unfamiliar person instead of the guardian did not increase the duration of activity. This indicates that it was the presence of the guardian, and not a person in general, that motivated the dogs to manipulate the toy. Interestingly, the authors also found that in both experiments the dogs spent the most time in close proximity to the researcher (who was seated in another corner of the room) when their guardians were absent. This suggests that the dogs may have been trying to gain social support from another human during a potentially stressful situation.

In conclusion, the authors state that their study “provides an important piece of evidence for the similarity between the secure base effect found in dog-owner and infant-caregiver relationships.” In other words, like human infants, dogs are more motivated to explore their surroundings and tackle problems in the presence of trusted caregivers. The authors also note that their findings could have implications for behavioral testing scenarios in which dogs are evaluated, with or without guardians present. For dog guardians, the results of the study are likely not surprising and provide further evidence of the strong bonds that form between people and companion animals.

Horn, L., Huber, L., Range, F. (2013) The Importance of the Secure Base Effect for Domestic Dogs – Evidence from a Manipulative Problem-Solving Task. PLoS ONE 8(5).