Behavioural scientists show that nonhuman species can engage in social evaluations of helpfulness and fairness when observing humans.
ABSTRACT ONLY Only an abstract of this article is available.
PEER REVIEWED This article has been peer reviewed.
ANIMAL RESEARCH This article involves research on captive animals, which Faunalytics opposes.
Summary By: Lukas Jasiunas | This is a summary of an external study | Published: April 17, 2017
Photo by Flickr user abidk 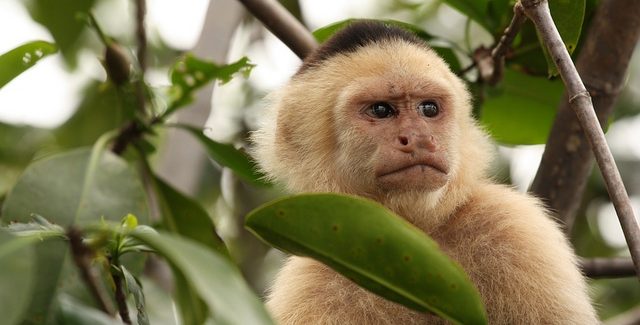 Third party evaluation of social interactions is common among people; we often make decisions based on the helpfulness and fairness shown by others. Capuchin monkeys, a highly social species, have been documented to work in cooperation on challenging tasks, share food and deliver rewards to others. Meanwhile, dogs have been members of multispecies social groups ever since their domestication.

Previous behavioural studies carried out with human infants were inspiration for this study on “third party evaluation” in non-human animals. In it, researchers created a set of experiments to study if animals prefer helpful and fair people or if such moral evaluations are exclusive to humans. Here, the animals were asked to make a choice by taking food from one of two involved researchers after having observed them interact with each other.

After observing one researcher helping another, the monkeys chose food from the two approximately equally often. However, they preferred to take food from non-helpers significantly less. Driven by such results, the researchers wanted to learn if intentionality plays a role in monkeys’ evaluation of others. Surprisingly, the monkeys showed a significant bias against explicit non-helpers, but if the non-helper was occupied and unable to help, the animals took food equally from the two people. Therefore, not only do capuchin monkeys take food from people who reject another individual’s request for help less willingly, but they also take intentionality into account.

So now we know that monkeys do evaluate third-party actions of humans and act according to their observed helpfulness. But do they reflect upon fairness? Punishment for failure to reciprocate is common among primate groups. The study found that when a person behaved unfairly by refusing to donate items to another person, after himself having requested and received three items from the second person, capuchins showed a strong preference for choosing the unfairly treated person. These results were further supplemented by the fact that the monkeys tended to take food from a person when they exchanged incompletely slightly less often, which means that the monkeys, similarly to ourselves, may attempt to quantify fairness. This was observed to be the case even if the receiver acted as if they were satisfied with the unfair exchange. However, when a person was unable to give three items because they started out with only one, the monkeys showed no sign of any bias against them.

All in all, the study concluded that capuchin monkeys show a bias against non-reciprocators and incomplete reciprocators when observing third party exchanges of goods between humans, and people who fail to reciprocate fully because they had fewer goods to exchange were not discriminated against. The final part of the study intended to extend the research beyond species of social primates. Do dogs engage in such moral evaluations? Pilot experiments confirmed that similarly to capuchins, despite choosing helping and help-receiving humans equally often, dogs chose non-helpers less often, indicating a preference for helpful people.

Animal rights advocates can surely benefit from the knowledge that moral evaluation while observing others is not exclusive to humans but is indeed common in other social species, too. Such studies support the existence of a core morality shared across species. Interestingly, the study showed no preference towards helpful people, but a clear avoidance of non-helper and reciprocity violators instead. Does that mean that helpfulness and fairness is an inherently expected trait, the norm, among social animals? New knowledge of the similarities between human and non-human animals and the complex thought processes of the latter are continuously emerging.