This study examined the phenomena of animal hoarding in Madrid, Spain and found many parallels of animal hoarding between Madrid and the U.S.
ABSTRACT ONLY Only an abstract of this article is available.
PEER REVIEWED This article has been peer reviewed.
EXTERNAL STUDY This is a summary of an external study.
Summary By: karol orzechowski | Published: March 20, 2015
Image by carterse under Creative Commons license

Animal hoarding is a welfare problem that sadly happens around the world, but in some countries, the phenomenon is under-reported and under-studied. In this study from Spain, researchers looked at two dozen cases of animal hoarding in and around Madrid. They aimed to establish some baseline data with which to analyze animal hoarding in Spain, and see how it compares to the findings of previous studies carried out in North America. The research reveals a number of similarities – and a few small differences – between animal hoarding cases in Spain and North America.

An animal hoarder is “someone who accumulates a large number of animals; fails to provide minimal standards of nutrition, sanitation and veterinary care; fails to act on the deteriorating condition of the animals or the environment […] and persists, despite this failure, in accumulating and controlling animals.” Though the phenomenon has been studied a fair bit in the U.S., and has even featured on popular TV shows, in parts of Europe its significance has not been acknowledged. In a groundbreaking study from Spain, researchers sought to gather “information on animal hoarding in Spain, with special attention paid to animal welfare. The methodology of previous studies was partially adopted to allow cross-cultural comparisons.” Therefore, this study was intended to identify patterns in Spanish hoarding cases, and also to understand how those cases fit within larger patterns established in previous North American studies. Researchers devised a questionnaire to gather information relating to the hoarder’s profile, the condition of the animals, and the condition of the physical environment, along with general case details. With this they were able to build a profile of each case that could be compared to and contrasted with others.

Across the 24 cases studied, over 1,200 animals were accumulated, with an average of 50 animals per case. It seems that in Spain as elsewhere, hoarding situations often have to become quite severe before they are reported. As in North America, the average age of hoarders was middle aged or older, and they usually lived alone. In Spain, there was an almost even split of cases involving male and female hoarders. In most instances, the welfare of animals had been significantly impaired, and animals showed serious illnesses and behavioural problems. Unique to this study, researchers found that some of the hoarding cases in Spain actually involved unit apartments in the city centre. This is an anomaly that has not been previously observed, and in past research, hoarding cases most often revolved around single-family dwellings in urban areas.

Though the statistics from this study are not conclusive, the authors note that “the present study is the first analysis of cases of animal hoarding in Spain and in Europe and that could help to increase awareness about this condition.” They state that their study reinforces the view that hoarding is a multi-dimensional problem that needs to be addressed on levels of animal welfare, human health, and public health. The researchers say that because of the numerous similarities between cases in Spain and the U.S., cross-cultural advocacy networks seeking to address the problem could be formed, helping to provide a broader response to the phenomenon.

Original Abstract:
Animal hoarding is considered to be an under-reported problem, which affects the welfare of both people and animals. Few published studies on animal hoarding are available in the scientific literature, particularly outside North America. The present study was designed to obtain data on animal hoarding in Spain, with a particular focus on animal welfare issues. Data were obtained retrospectively from 24 case reports of animal hoarding involving a total of 1,218 dogs and cats and 27 hoarders. All cases were the result of legal intervention by a Spanish humane society during the period from 2002 to 2011. Hoarders could be characterised as elderly, socially isolated men and women who tended to hoard only one species (dog or cat). Most cases presented a chronic course of more than five years of animal hoarding. The average number of animals per case was 50, with most animals being dogs. In 75% of cases the animals showed indications of poor welfare, including poor body condition, and the presence of wounds, parasitic and infectious illnesses. Amongst the hoarded animals aggression and social fear were the most commonly reported behaviours. To the authors’ knowledge, this is the first report on animal hoarding in Spain and one of the first in Europe. Further studies are needed to fully elucidate the epidemiology, cross-cultural differences and aetiology of this under-recognised public health and welfare problem. More research might help to find efficient protocols to assist in the resolution and prevention of this kind of problem. 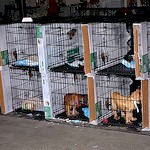 The Connection Between Domestic Violence And Animal Cruelty In Puerto Rico: An Anthropological Study

This study of Porto Rican domestic violence, with a focus on companion animals, echoed many of the same dynamics found in other countries.