Artificial reefs may be able to buffer rare and non-migratory species from local extinction in times of drought, and should be considered in efforts to preserve aquatic biodiversity.
ABSTRACT ONLY Only an abstract of this article is available.
PEER REVIEWED This article has been peer reviewed.
EXTERNAL STUDY This is a summary of an external study.
Summary By: karol orzechowski | Published: April 9, 2018
Photo by Flickr user myfwc

Reefs are underwater structures where fish congregate and live, and for hundreds of years, humans have known that reefs can be both natural and artificial. Natural reefs are made of rock, sand, coral, and/or other materials, while artificial reefs can be made of sunken ships, fallen trees, or other structures. Though natural reefs are obviously important, artificial reefs have also been shown to be beneficial for everything from providing refuge from predators to establishing sanctuaries to stabilizing shorelines. Studies of artificial reefs have tended to focus on saltwater or non-tropical freshwater environments, and less is known about the effects and potential value of artificial reefs in natural tropical freshwater environments.

This study evaluated the effects of introducing small-scale artificial reefs into “the black waters of the Rio Negro basin in Brazil,” waters which “support a low fish biomass.” The study was carried out across “all four seasons of the hydrologic cycle during two years, and two different configurations of the lake-shore interface.” The researchers built and deployed eight artificial reef structures made out of wood, providing about 37.5 cubic meters of submerged habitat. They used a total of 16 sites, with two experimental reefs and two controls at each of the four lake locations.

Over the course of their study, the researchers collected more than 7,500 fish and identified them as coming from five orders, 21 families, and 107 species. Catfish were by far the most abundant, making 53% and 74% of the fish at the artificial reefs and control areas, respectively. Interestingly, they found that artificial reefs “did not result in statistically significant effects on fish assemblages,” but they did “exhibit a higher overall species richness and more than twice the number of exclusive species than the control sites,” indicating that the reefs were an important addition for a number of species in the lakes. In particular, the study notes that the fish that were helped by the artificial reefs were “relatively low-abundance fish” and primarily “species that do not migrate out of the lake as part of the life cycle, so the seasonal unavailability of the flooded forest greatly reduces their suitable habitats.”

For conservation and wildlife advocates, the study should be an encouraging indication of a potential technique to help species at a small-scale, local level. Of cource, creating artificial reefs is not as simple as throwing some wooden structures in the water: care needs to be taken in terms of the materials, construction and placement of artificial reefs. Those with no experience may want to consult with local officials and conservation groups to see what kind of action is possible, and environmentally advisable. 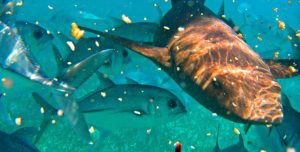 A longline fishing strategy may be a significant improvement over "shark meshing" to protect both sharks and humans.

The ocean environment where manatees live near Brazil holds a significant amount of garbage, which may hinder the success of manatee conservation.

A computer model can generate a realistic representation of the social and behavioral dynamics of the dolphin and boat populations, as well as observed patterns of disturbance.