The Adoptability Of Urban Street Dogs

A study from Turkey finds that urban street dogs can be trained and integrated into a domestic situation with relatively little trouble.
ABSTRACT ONLY Only an abstract of this article is available.
PEER REVIEWED This article has been peer reviewed.
Summary By: Mona Zahir | This is a summary of an external study | Published: May 3, 2017
Photo by Flickr user leoleamunoz 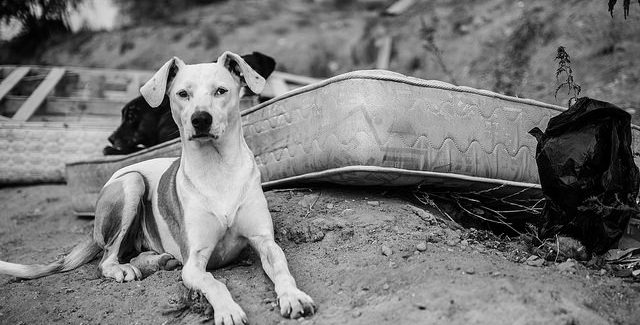 In developing countries such as Turkey, there is a problem of rising numbers of urban free-ranging dogs. With many thousands of these dogs being brought to shelters every year, there is concern for the cost to the community and for the health and welfare of the dogs. These dogs are typically difficult to find homes for, both because of the public’s uncertainty about each dog’s ability to adapt to living indoors, and because they tend to act more fearful towards potential adopters.

In a study published by Elsevier in the Journal of Veterinary Behavior, researchers surveyed the adopters of 75 urban free-ranging dogs in Turkey. The survey asked for demographic information about the dog as well as about the dog’s behavioral problems and changes in general behavior. The most common behavioral problem reported was “hyperattachment” to the adopter (58.7%), followed by tendencies to run away (32%). Additionally, 74.7% of respondents reported that their dogs were timid at first. However, most adopters (69.3%) reported a positive change in their dog’s behavior after being adopted: 58.7% of dogs reportedly became more self-confident and 45.3% reportedly became more easy-going, whereas only 21.3% reportedly became more aggressive and 8.0% reportedly became more timid. Post-adoption, most dogs (65.3%) were able to recover from a fearful event in only a few moments. Furthermore, 72.0% of adopters reported that they did not have trouble house-training their dog, and 65.3% reported not having had trouble leash-training their dog.

These survey results indicate that free-ranging urban dogs are often timid at first but usually improve over time in becoming more self-confident and easy-going. Though the number of dogs reported as aggressive increased in the post-adoption period, the authors of the study believe this to be a result of the dogs’ inner personalities coming out after getting over the initial stress of a new environment. The relative ease of house and leash training these formerly free-ranging dogs also reflects positively on their ability to become companion animals.

Overall, the authors of the study conclude that “it can be suggested that urban free-ranging dogs are adaptable to live in adoptive families’ environment,” and note that further studies can also help paint a clearer picture of these dogs’ behaviors and needs. Advocates can use studies like this to inform the public that urban free-ranging dogs are not only adoptable, but have a good chance of being excellent companions with patience and training.

There is still much room for improvement in Latin American veterinary teaching. University instruction needs to remain practical and useful as it moves forward.

‘Fido, Stop’: Researching The Reinforcement Of Stereotypic Behaviors In Dogs

A series of three studies looks into why dogs do the seemingly inexplicable things they do. Spoiler alert: Their guardians and living environments may be to blame.