A Bee’s Life In The City

Can bees thrive in urban ecosystems? These researchers argue that quality, not necessarily quantity, matters when planting floral food sources for wild bees.
FULL TEXT The full text of this article is available.
PEER REVIEWED This article has been peer reviewed.
ANIMAL RESEARCH This article involves research on captive animals, which Faunalytics opposes.
EXTERNAL STUDY This is a summary of an external study.
Summary By: Daniele Pollicino | Original Study By: Casanelles-Abella, J., Müller, S., et al. (2021) | Published: March 24, 2022
Photo by Damien TUPINIER on Unsplash

Over the last few decades, we have witnessed a dramatic decrease in bee populations. Wild bees are essential to our ecosystem, but they depend on large amounts of nectar and pollen to survive and reproduce. Although urbanization is known to harm biodiversity, urban landscapes are warmer and less pesticide-heavy than rural settings. Plus, they tend to have more woody plants and diverse flowers, which may help to sustain bee populations. By understanding the urban bee diet and improving urban land management, researchers see a major opportunity for helping wild bee communities thrive.

The researchers involved in this study investigated the larval diet and distribution of four European bee species: Chelostoma florisomne (the large scissor-bee), Osmia bicornis (the red mason bee), Osmia cornuta (the European orchard bee), and Hylaeus communis (the common yellow-face bee). They chose these bees for their varying degrees of diet specialization, or the range of nutrients and resources a given species will forage. The large scissor-bee is the most specialized, while the common yellow-faced bee survives on the broadest range of plants. The researchers studied their behavior across five urban settings, including Antwerp, Paris, Poznań, Tartu, and Zurich. Specifically, they wanted to understand how diet specialization differs and affects their distribution in urban ecosystems.

To assess this, the researchers used state-of-the-art research methods in the field of ecology: trap nests and pollen DNA metabarcoding techniques. Trap nests have been widely used since the 1990s and consist of artificial nesting habitats for bees. They allow researchers to easily observe how bees interact with food sources and test environmental changes. Pollen DNA barcoding allows for fast and fine-scale plant identification and characterization of feeding preferences.

At each site, researchers installed trap nests in trees and collected pollen carried by the four bee species. A total of 41 plant families, 93 genera, and 135 species were identified from the nests. Diet specialization differed greatly among species: from 1 family and 4 species in the large scissor-bee, up to 32 families and 81 species in the common yellow-face bee. These findings were in line with researchers’ expectations that specialized bee species would have strong preferences for specific plants and a highly consistent diet, whereas more generalist bees would have a more flexible diet and be capable of switching to alternative plants in the absence of their usual food sources.

Regarding their distribution, the researchers found that the likelihood of encountering large scissor-bees, red mason bees, and European orchard bees decreased with higher levels of urbanization. In contrast, the distribution of common yellow-face bees remained constant regardless of urban intensity. This is further evidence that eating a wide range of plant sources can help bees thrive in urban settings.

The results seem to indicate that species with broad diet preferences are better suited to inhabit urban greenspaces. However, eating a broad diet also puts bees at risk of ingesting toxic or otherwise indigestible pollen. Overall, diet specialization is a key factor in determining whether a given bee species can adapt to new urban spaces. Narrower preferences might increase bees’ vulnerability when environmental factors change, e.g., changes in greenspace and the arrival of diseases.

The researchers point out there may be other factors influencing urban bee survival. For example, when studying bee diet, they only accounted for the family, genus, and species of each plant, and not the nutritional properties of the pollen itself. Furthermore, they suggest that future scholars should compare bee diets in both urban and non-urban ecosystems.

To foster wild bee communities in urban areas, the researchers recommend taking stock of what plants are currently present and increasing plant diversity, rather than the overall quantity. The current research shows that common urban weeds contribute very little to support bees’ nutritional requirements. On the contrary, native and exotic woody species are a widely-used floral resource. Finally, since tree distribution in cities is mostly reliant on humans, this is a crucial point of action for creating bee-friendly cities.

Author: Daniele Pollicino
Daniele is a PhD student at the London School of Economics (LSE), interested in applying behavioral science and psychological methods to the study of sustainable food consumption. The fight against global warming is at the core of his activities, both personal and academic. His greatest passion is music and he aspires to become a saxophone player and music curator. Born in Sicily, today he lives in Central London. 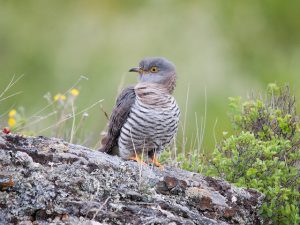 The Cuckoo As A Canary In The Conservation Coal Mine

The Cuckoo is a charismatic bird whose populations can be used as an effective tool to monitor overall bird diversity in different European countries.

The Ocean: A New Home For Pandemic Plastic Waste

The release of pandemic-generated plastic waste in the global oceans presents a new and alarming situation.