Large black fur dogs are adopted at lower rates than dogs with other colours and this trend is sometimes referred to as Big Black Dog (BBD) Syndrome.
FULL TEXT The full text of this article is available.
Summary By: Faunalytics | This is a summary of an external study | Published: November 4, 2011
Image by Pixabay user patstatic

Large dogs with black fur are adopted at lower rates than other dogs. This trend is referred to as Big Black Dog (BBD) Syndrome. The author investigates this trend, discusses factors contributing to it, and possible ways to ameliorate the problem.

“Big Black Dog (BBD) Syndrome is the extreme under-adoption of large black dogs based not on temperament or health, but rather on the confluence of a number of physical and environmental factors in conjunction with the Western symbolism of the color black. The color black in Western society is typically representative of evil and other negative connotations. The physical and environmental factors of size, color, the kennel environment, and the “genericness” of black dogs, when combined with the negative associations of the color black in Western culture, create what I define as “unconscious background checking.” “Unconscious background checking” is a phenomenon caused by the belief that shelter dogs have questionable backgrounds. As a result, the public, in order to protect themselves from “damaged” dogs, tend to shy away from the black (impure) dogs, and thus unconsciously discriminate against black dogs.”

“The paper begins by describing Big Black Dog Syndrome and its effects in shelters across the United States. I then discuss the physical and environmental factors that contribute to BBD Syndrome; Western symbolism associated with the color black, historical examples of black dogs as negative entities in Western culture, and the concept of “unconscious background checking,” which negatively impacts the adoption rates of BBDs. Lastly, I offer some suggestions as to how shelters in the United States can ameliorate the negative effects of BBD Syndrome.”

The link below will begin a download of a PDF version of this article.

The color-based discrimination that black dogs and cats face may be so deeply engrained in US culture that it is acted upon unconsciously. 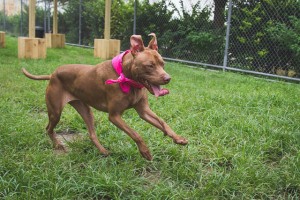