A new paper makes a case that, when it comes to animals whose sentience has not be fully backed by science, we should act with precaution.
FULL TEXT The full text of this article is available.
PEER REVIEWED This article has been peer reviewed.
Summary By: Che Green | This is a summary of an external study | Published: May 12, 2017
Photo by Flickr user little79bear 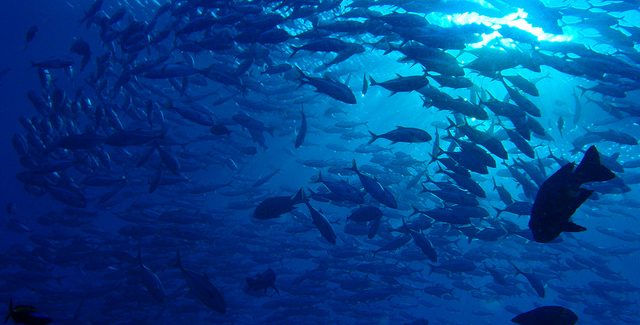 In a world that is, in many places, in the midst of a debate over the ethics of consuming animals, the concept of sentience is a key factor. While major inroads have been made in the general public’s understanding of the sentience of mammals such as pigs, cows, goats, and sheep, and even birds like chickens, the sentience of fishes, invertebrates, and insects is still hotly debated.

Here at Faunalytics, we have looked at the sentience of fishes, their different cognitive and behavioral abilities, and even what the public thinks of their sentience. It’s a contentious issue and while many scientists and researchers are still working hard to establish a base of evidence for the sentience of these “lower order” animals, philosophers and ethicists are working other angles. In this paper, we have the argument for a “precautionary principle” applied to fishes, insects, and invertebrates, that would, by its very nature, slow or halt many of the abuses we currently perpetrate on them.

Interestingly, the paper does not seek to argue for or against the presence of sentience in these non-human animals. Instead, the central argument here is “aimed to support actions to guard against the possibility that they may be.” However, where other discussions if this precautionary approach may focus on rather weak premises, this paper sets forth an argument “focused on character rather than immediate action-guidance.” While

much of the existing literature around this debate focuses advocating for specific actions, the paper argues that “that argument has been found plausible when the complexity and ‘price’ of such precautions appear low.” The authors note that this is because “precaution cuts both ways.” In other words, taking precaution on one count might have a substantial cost, and we could be “spending that attention” on another issue. In some cases, then, arguing for specific actions may create an either/or dichotomy in which people choose to continue to exploit such non-human animals based on their wants or needs. Advocates’ challenge is to get around this.

Ultimately the paper provides animal advocates with a strong position from which to advocate for fishes and other “lower order” animals. Rather than continuing on a path of abuse and destruction, reflection and consideration is necessary. If fishes and invertebrates are sentient, and animal advocates believe strongly that they are, than the actions we subject them to are egregious and need to stop immediately.

Knutsson, S., & Munthe, C. (2017). A Virtue of Precaution Regarding the Moral Status of Animals with Uncertain Sentience. Journal Of Agricultural And Environmental Ethics, In Press.

Our Faunalytics Index for July 2018 looks at the favorability and credibility of animal protection, the survival of manatees, and much more.