Once-untouchable deep-sea ecosystems aren’t safe from plastic. This study seeks to find just how contaminated two of the deepest ocean trenches are with plastic waste.
ABSTRACT ONLY Only an abstract of this article is available.
PEER REVIEWED This article has been peer reviewed.
EXTERNAL STUDY This is a summary of an external study.
Summary By: Megan Allison | Published: May 20, 2019
Photo by Giga Khurtsilava on Unsplash

Humans have created many synthetic materials to make our lives easier, such as pesticides for better crop yield and medications for a healthier life. However, these products produce a huge amount of waste. When they’re used up, they‘re thrown or washed away and, eventually, find their way to the ocean. One especially dangerous type of waste is POPs or Persistent Organic Pollutants.

POPs have many qualities which make them especially persistent in ocean habitats: they cling to sediment, organic particles in the water, and fatty tissues within organisms. This allows them to travel throughout the environment in various ways, whether by currents, by clinging to falling organic matter (“marine snow”) to the deep oceans, and even within organisms who eat and filter POPs from the water.

Due to the logistical difficulties of surveying deep-sea ecosystems, research of POPs in the ocean has mainly been conducted within the first hundred meters beneath the surface. However, there is much more to the ocean than the surface; the deep sea is home to a rich variety of life, despite the harsh conditions. Much of the plant and animal life in the deep sea survives on organic matter falling from the surface (the previously mentioned marine snow), in addition to isolated points of energy from dead whales and fissures in the ocean bed which release chemicals and hot water.

Studying deep sea animals and their ecosystem has proved incredibly challenging, as humans cannot survive in these conditions to collect samples. Additionally, efforts to trawl and bring organisms to the surface have incredibly low odds of success. Even when researchers do find an organism, the pressure change from the deep-sea to the surface can cause massive damage to the animal, making them next to impossible to study further.

One study attempted to overcome these logistical issues by bringing the lab to the ocean. The researchers deployed deep-sea landers equipped with trappers in the Kermadec and Marianas trenches, both in the Pacific. Using these, they were able to collect samples and data from areas of the world no human has ever reached.

Both trenches were found to contain unusually high levels of two major POPs: PCBs and PBDEs. Of the two trenches, the Marianas was shown to harbor the highest levels of POPs, possibly due to its proximity to the ‘Great Pacific Garbage Patch’, an area of over half a million square miles of collected plastics, debris, and chemical waste. PCB levels were found to be fifty times higher in organisms in the Marianas Trench than in those which live in the Liaohe River, one of the most polluted rivers in China.

For animal advocates, this study highlights the crisis our ocean’s ecosystems are currently experiencing. The massive volume of pollution humanity is generating and irresponsibly dumping is accumulating in places we once thought of as untouchable. Hopefully, with more data, we’ll begin to understand how POPs will affect the unique and specialized organisms who call these trenches home, and how we can go about reversing or mitigating some of the damage caused by them.

Author: Megan Allison
Megan Allison is from Scotland and for as long as they can remember, they've always loved animals, especially whales. It led them to study Zoology at the University of Glasgow and complete a dissertation on grunting humpback whales. Their dream is to work in conservation research and see as many incredible animals as they can. 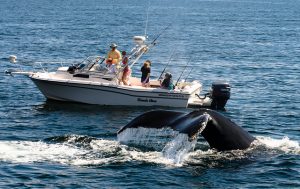