The Invisible Plastic In Marine Animals

A study of 5 different species of fish sold for food found that every species tested contained traces of microplastic, with certain species more contaminated than others.
PEER REVIEWED This article has been peer reviewed.
EXTERNAL STUDY This is a summary of an external study.
Summary By: Adina Nadler | Original Study By: Ribeiro, F., et al (2020) | Published: October 26, 2020
Photo by Jasmin Sessler on Unsplash

We’ve all seen images of the ocean littered with plastic. Needless to say, plastic harms marine life, and humans are not immune to the repercussions. Marine animals likely consume microplastic (meaning, small traces of plastic) that can bioaccumulate up the food chain, including being ingested by humans. In this study, researchers developed a new method for detecting and measuring microplastic contamination in marine animals, to give further insight into how much plastic people are ingesting.

This issue has real consequences for humanity, both because of the sheer volume of marine life in some diets and because of the possible health risks associated with ingesting plastic. It’s estimated that in European countries where eating shellfish are popular, people might be ingesting around 11,000 microplastic particles per year, while other research finds that the average person is likely consuming around 5 grams of plastic every week (0.5 grams of this from shellfish). We know that when marine animals ingest microplastic it can cause physical damage, feeding and reproductive issues, and even death. At this point, we still know very little about how ingesting microplastic affects humans, and this study is an important step in learning more about our potential risk.

Our current methods and technology for analyzing and quantifying microplastics are limited, and this study set out to improve upon these methods. The current technology doesn’t effectively detect microplastic in natural environments, and it also can’t identify microplastic particles below a certain size. The method used in this study, called pyrolysis-gas chromatography mass spectrometry (Py-GC/MS), is promising because it can analyze microplastics that are too small to be detected by other methods, and it is useful for particles that are found in complex environmental samples.

The authors had three goals:

For the experiment, the authors selected six different plastics and purchased five different species of raw marine animals from a local fish market. They dissected the edible part of each animal for analysis. They used a method to imitate digestion, employed a solvent at a high temperature and pressure to extract the plastics, and then performed the Py-GC/MS analysis.

The study found that there was plastic in every species studied, and that different concentrations were found between species and between individuals of the same species. From lowest concentration to highest, the ranking of the sea creatures was as follows, with average plastic content (mg g−1) in brackets: squid (0.01); oysters (0.01); prawns (0.01); crabs (0.03); and sardines (0.3).

Microplastic contamination isn’t random, and there are certain factors that influence it. The authors found that while some of their findings made sense according to known characteristics of the sea animals, other findings were very surprising.

One factor that affects microplastic contamination is habitat. Squid, for example, showed the lowest concentration of microplastic. They live in the deeper parts of the ocean, and the amount of microplastic likely decreases with the depth.

Most literature argues that microplastic stays in the internal organs, so you can avoid it and avoid risk by disemboweling the animal. This held true for the squid; their internal parts are removed before consumption so the authors removed these parts for the analysis, and squid showed the lowest levels of microplastic. Crabs had a fairly high concentration of plastic, which makes sense because the crab’s abdomen is used in many dishes.

But it turns out that it’s not that simple. Sardines were the species with the highest concentration of microplastic even though their internal organs were removed for the analysis. Because of this surprising result with the sardines, the authors began to think about other potential sources of plastic contamination. One possibility is that microplastic transfers during food processing and handling or during transport. The packaging might also be a source, especially because it is very common to buy fish wrapped in plastic.

We don’t currently understand how all these factors interact with one another, so for now there’s no way to completely avoid ingesting microplastic from sea creatures—other than by cutting them from your diet. But there are even greater implications of this study. The study demonstrates a pattern when it comes to human impact on the planet, which is that everything we do to the Earth, and to the animals living in it, ultimately affects us. Throwing plastic into the ocean is careless, dangerous, and harms animals in its own right, but this is much easier to ignore when we don’t see any personal consequences. By gaining more understanding of microplastic contamination in marine life, we learn not only to be more careful about what we eat, but also to be more aware of the plastic we are putting into the ocean—for all animals’ sake.

Author: Adina Nadler
Adina will be attending Michigan Law School in 2021, with the ultimate goal of being an advocate for animals and for the environment. She currently lives in Madrid, teaching English and volunteering for animal welfare organizations. 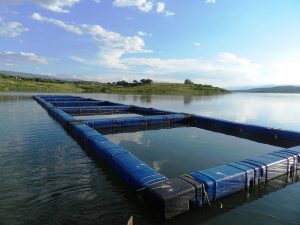 Research suggests that the total numbers fish farm escapees may be 2-4 times higher than the numbers reported to the authorities by fish farmers.