Regular hunting moratoriums may be a promising way to mitigate concerns about lion survival, sex ratios, and age distributions.
FULL TEXT The full text of this article is available.
PEER REVIEWED This article has been peer reviewed.
EXTERNAL STUDY This is a summary of an external study.
Summary By: Kopal Jha | Published: April 22, 2019
Photo by Juanma Clemente-Alloza on Unsplash

The practice of trophy hunting inflicts heavy tolls on the already-scant lion populations of Africa. Trophy hunting targets male lions, especially those 5-6 years of age, causing age and sex imbalances in the population and disrupting the social organization of lion prides. Because there are significant financial incentives to continue trophy hunting, the practice is unlikely to be abolished soon.

In this study, researchers measured lion survival and population growth before and during a lion hunting moratorium enacted by the Government of Zambia from 2013-2015.  Through intensive monitoring, the researchers were able to compile a database of lions in 21 prides and 24 male coalitions from 2008-2015. The age and sex of each individually-identified lion was also recorded. The researchers fit their data to statistical models of survival to determine how the pre-moratorium cohort fared after the moratorium, and what effects the moratorium had on the demographics (age and sex) of the lions.

The researchers’ findings confirmed that trophy hunting had a negative effect on male lion survival prior to the moratorium. Fortunately, the moratorium led to four encouraging changes in the population of Zambian lions:

While the moratorium policy instituted by the Zambian government is controversial, this study shows it achieves the intended effect of recovering lion populations. Hunting moratoriums can lead to more sustainable hunting practices, which are in the interests of both trophy hunting communities (who will continue to have a source of revenue so long as the supply of male lions is intact) and conservationists (who will be assured that the demographics of lion populations are kept in check by the moratorium).

Of course, trophy hunting is not a favorable for lion survival overall and is not acceptable to virtually all animal advocates. However, based on its economic contributions, is unlikely to be abolished completely. This study presents regular hunting moratoriums as a promising compromise between trophy hunters and conservationists, to mitigate concerns about lion survival, sex ratios, and age distributions. 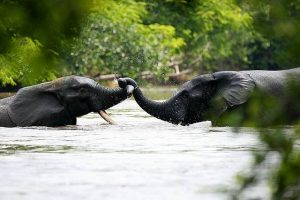 The Effectiveness Of Armed Conservation

"Armed conservation" may be necessary in situations where violent poaching is prevalent. This article examines the dynamics of "threat economy."