A new paper seeks to quantify changes in the Earth's biomass over time, and looks at how we might mitigate humans' impacts on the planet.
FULL TEXT The full text of this article is available.
PEER REVIEWED This article has been peer reviewed.
Summary By: Stella Bang | This is a summary of an external study | Published: October 9, 2017
Photo by Flickr user seemster

Technological advances have helped us produce and destroy with increasing efficiency. As a result, we are now worried about exhausting the Earth’s phytomass (plants) and zoomass (animals) soon. This article, from Population and Development Review, evaluates changes in the masses of plants, humans, wild animals, and domestic animals over time. Using this data, the study assesses how humans have impacted other forms of life, and it stresses the urgency of limiting our use of them. For animal advocates, the study suggests that decreasing meat consumption is a dire necessity for humanity’s long-term survival.

The authors present changes in phytomass and zoomass throughout history and compare them with changes in anthropomass (humans). They analyze how the human population’s exponential increase may have affected other organisms. Phytomass peaked at over 1,000 billion tonnes of carbon (Gt C) about 5,000 years ago. As the human population grew, it exploited plants in a variety of ways, including farming land, raising plant-eating animals, and causing fires. By the 18th century, phytomass had decreased to about 750-800 Gt C. This number continued falling to 660 Gt C (year 1900) and 550 Gt C (2000). By contrast, the human population has grown exponentially, from 200 million (0 A.D.) to 900 million (1800) to 6.1 billion (2000). It is plausible that the rapid growth of human settlement was associated with the rapid decrease in phytomass.

Changes in the masses of humans, domestic animals, and wild land-based animals provide still more insights into our impact on other organisms. Consider the changes between the years 1900 and 2000: Anthropomass more than quadrupled from 13 to 55 million tonnes of carbon (Mt C). The zoomass of domestic animals also increased from 35 to 120 Mt C. In contrast, the total zoomass of wild land-based animals decreased from 10 to 5 Mt C. This pattern translates into an upside-down ecological pyramid and suggests the instability of our current biosphere.

Another parameter, called human appropriation of net primary production (HANPP), specifically tells us the degree to which humans have consumed phytomass. It has some caveats, however. Scientists have not yet agreed about how HANPP should be calculated, so available estimates vary significantly: 27% (1986), 24% (1990), 32% (2001), 20% (2004), and 24% (2007). Regardless, humans apparently use a sizeable percentage of the world’s phytomass. This is yet another indication of how much humans dominate in using the Earth’s resources, and increasingly so.

Although we are only beginning to understand it, the human impact on the biosphere is alarming. The authors insist that we limit it immediately because our ability to harvest the environment will only keep improving. They suggest two main strategies to decrease our impact: decrease rates of consumption and use resources more efficiently. Reducing excess food supply (and decreasing food waste) is especially important. For animal advocates, this article shows that decreasing meat consumption could promote environmental sustainability. Soon, meatless diet may no longer be a matter of choice, but a necessity for humanity’s survival. 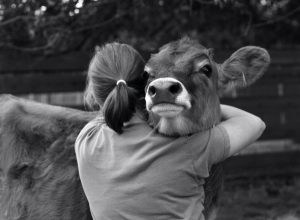 Caring For Carnivores In Sanctuaries: The Ethics

In cases where carnivores such as lions are in human care, what is the most ethical way to feed them? This study explores the various perspectives.