Health care workers have high opinions of animal research and think it does a lot of good, but their beliefs do not match factual findings of animal research's efficacy.
FULL TEXT The full text of this article is available.
PEER REVIEWED This article has been peer reviewed.
ANIMAL RESEARCH This article involves research on captive animals, which Faunalytics opposes.
Summary By: karol orzechowski | This is a summary of an external study | Published: July 4, 2015
Photo by Flickr user tamuc 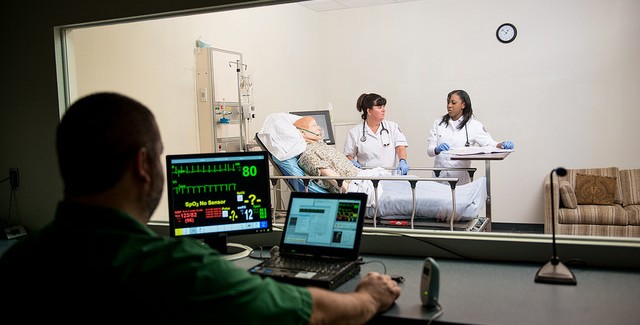 Many people have an opinion on the use of animals in scientific research, but, in terms of value, some opinions are louder and are seen, perhaps, as more “legitimate” than others. Consciously or not, some people seem to value the opinions of scientists or other professionals, because they are considered more informed about or experienced in the issue. The public are generally viewed as “conditional acceptors” of animal research – accepting the practice because it promises cures and treatments for human illnesses, as long as animal welfare is taken into account on some level. However, there is growing evidence that raises concerns about the practice of animal research (AR) on two major levels:

First, the methodological quality of AR is often poor in both experimental design and animal welfare aspects[…] AR publications rarely report performing a systematic review to determine the necessity of the research project, rarely report the use of continuous monitoring of the level of anesthesia or pain control, and often do not report the use of acceptable methods of euthanasia. Second, the translation rate from AR to humans has been disappointing. Extensive AR in the fields of sepsis, stroke, spinal cord injury, traumatic brain injury, cancer, degenerative neurological diseases, acquired immunodeficiency syndrome, asthma, and other fields has translated to humans in 0-5% of cases.

In other words, the use of animals in research is not only ethically objectionable, it also does not appear to be particularly effective in predicting human health outcomes. The growing literature challenging animal research is something that advocates are becoming increasingly aware of and employing in their various work.

So, we arrive at a point of cognitive dissonance: HCWs believe in animal research and have high expectations of its efficacy, however their expectations are greater than empirical data shows is being achieved. What’s more, when asked if they think that animal research is contributing positively to human health, many HCWs tend to think it is doing more good than is actually the case. Their support of animal research could be misleading to the general public who might look to HCWs to have a trustworthy opinion. The public might end up believing something based on the HCWs’ perceived authority, rather than considering the facts. For advocates, this means that even more education of the general public needs to be done to inform them of the truth about animal research, and encourage them not to necessarily believe the opinions of those working in science.