Addressing discarded fishing gear and minimizing "ghost fishing" will require a concerted international effort, including better data collection.
ABSTRACT ONLY Only an abstract of this article is available.
PEER REVIEWED This article has been peer reviewed.
Summary By: Faunalytics | This is a summary of an external study | Published: September 22, 2016
Photo by Flickr user myfwcmedia 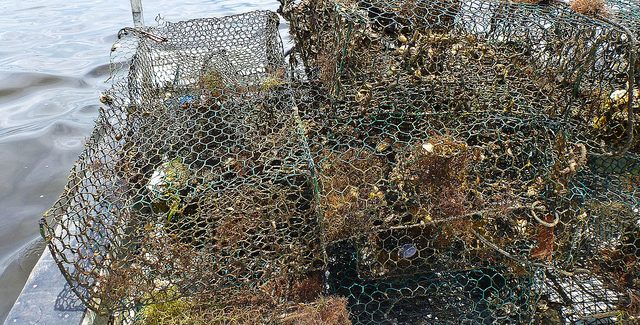 We put an estimated 6.4 million tons of marine debris into global seas each year, including abandoned, lost, and discarded fishing gear (ALDFG). Unfortunately, the amount, distribution, and effects of ALDFG have “risen substantially” over the past few decades as fishing operations expand and fishing gear is made with more synthetic and buoyant material.

One serious result of ALDFG is “ghost fishing,” which occurs when gear continues to catch and kill fish. It’s something we have covered previously at Faunalytics, but like other animal issues, it’s an ongoing concern that warrants exploration and study. ALDFG must be addressed on an international, collaborative level, but the issue still flies under many advocates’ radars.

The authors of this study looked at the data collection and management of 19 different global and regional bodies (which they refer to as “IGOs”) to better understand the magnitude of ALDFG and its impacts. They also propose a set of approaches for dealing with the problem. The authors looked at technical reports from a range of national and international governing bodies, reviewed the types of fishing gear used in active fisheries, and considered the types of gear that would be used by illegal, unreported, or unregulated fisheries. They also looked at what kind of mandate each IGO had for monitoring and controlling ALDFG and ghost fishing, if any.

The findings of the study show that while some work is being done, there is still a long way to go. Only 21% of IGOs have explicitly mandated programs to monitor and control ALDFG and ghost fishing. Of the three IGOs with relevant mandates, only two had at least one relevant binding measure. That said, more than 50% of the IGOs maintained logbooks and observer data protocols for ALDFG.

Observations include where, what type, the quantity, and proportion of ALDFG retrieved. The researchers noted that there is a need to coordinate data collection across various bodies that have protocols in place and to fill in gaps for IGOs that lack data collection procedures. Unfortunately, more than a third (7 of 19) IGOs had no measures to control ALDFG in place at the time this study was published.

The authors present some notable strategies for mitigating ALDFG. In addition to creating data collection protocols for the countries that don’t have any and strengthening those protocols that already exist, the authors suggest modifying fishing gear to make it more identifiable and traceable. This would make it easier to hold those who abandon gear accountable. These are merely initial steps that will not rid the world of ghost fishing; however, they position IGOs to make a significant impact.