Companion Animal Issues: What We Can Learn From The 2008 Recession

The economic fallout of the coronavirus pandemic is still unclear. This study looks at the aftermath of the 2008 recession and offers clues about how companion animals and shelters might be affected.
ABSTRACT ONLY Only an abstract of this article is available.
PEER REVIEWED This article has been peer reviewed.
EXTERNAL STUDY This is a summary of an external study.
Summary By: Antonia Shann | Original Study By: Weng, H. Y., & Hart, L. A. (2012) | Published: May 12, 2020
Photo by Manuel Meza on Unsplash

In the jaws of the coronavirus pandemic, it’s hard to think about anything else. Stuck in lockdown in our homes, many of us have turned to animals for comfort: in a glimmer of good news, animal shelters are emptying, as more people foster and adopt. But with recession looming, how will the aftermath of the pandemic affect companion animals? Insights from a 2012 study of how the 2008 recession affected companion animals can help us prepare for the road ahead.

The study in question looked specifically at the Anti-Cruelty Society shelter in Chicago, Illinois. The authors reviewed the shelter’s electronic records from 2000 to 2010. By comparing data from before and after the recession hit, they examined how the recession impacted rates of relinquishment (i.e. giving up the animal to a shelter), adoption, and euthanasia.

To figure out the impact of the recession, the authors used pre-2008 data to generate expected trends, and compared those predictions to the post-2008 data. Along with this method, the study also used keywords in the data to determine the likely reason a companion animal was relinquished to the shelter. Authors note that keywords relating to cost, moving or home foreclosure, and the animal’s illness are plausibly connected to the owner’s financial status.

Comparing predictions to the observed data revealed a significant increase in the number of senior dogs (at least 8 years old) relinquished after the recession. The number of adult dogs and puppies also showed an increase, but the trend was less stark. In contrast, the number of adult cats and kittens relinquished was lower than projections – hearteningly, it seems that once someone adopts a cat, the recession doesn’t cause them to relinquish him or her. Turning to the motives for relinquishment, the study found a spike in references to cost, particularly for dogs.

The number of animals relinquished impacts rates of adoption and euthanasia. As such, the authors looked at the data for adoption and euthanasia rates, both before and after, adjusting for the number relinquished. More dogs were euthanized than expected, but fewer cats. After the recession hit, fewer animals than predicted were adopted, but here again, adoption rates were lower for dogs than for cats.

Throughout the study, the pattern in the data suggests that the recession hit dogs more than cats. The authors suggest that the differences here relate to the cost: dogs are more expensive to care for than cats. Human owners struggling economically may be unable to afford to care for their dogs, obliging them to relinquish their animals to a shelter.

Since economic recession seems to impact adoption more than relinquishment, the authors suggest that it’s important to promote adoption during such times. Incentive programs such as low-cost veterinary care can encourage adoption. Supporting new companion animal owners ensures that the relationship between adopter and adoptee flourishes.

The data from this study, as well as the author’s proposals for how we can help companion animals, are relevant for us today. Lockdown measures may have temporarily emptied many animal shelters, but we’re still staring down the barrel of a global recession and need to plan accordingly.

With difficult and stressful times ahead, we must try to be there for our fellow animals as well as for each other. Moving forward, we’ll need to support the new interspecies families formed through the recent spike in fostering and adoptions. We need to offer support, so that no family has to relinquish their companion animal, and we need to promote adoption to help companion animals find their forever homes.

Can trap-neuter-vaccinate-return be a viable solution to the animal shelter crisis in the U.S.? This study finds success at six municipal shelters. 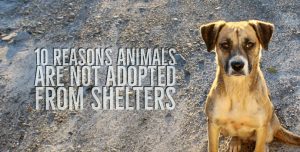 What are the reasons that dogs and cats may not be adopted from animal shelters in the U.S. and abroad? We share 10 of them and the supporting research.