This article looks at the history animal welfare as an academic discipline, examines the role of animal welfare centers in advancing the field, and analyzes some of their advantages and pitfalls.
FULL TEXT The full text of this article is available.
PEER REVIEWED This article has been peer reviewed.
EXTERNAL STUDY This is a summary of an external study.
Summary By: Antonia Shann | Original Study By: Phillips, C. J., & Molento, C. F. (2020) | Published: October 29, 2020

In 1964, Ruth Harrison’s book Animal Machines was published, exposing the suffering of farmed animals. In response to the ensuing public outcry, the U.K. government set up a committee led by Francis Brambell to investigate animal welfare on intensive farms. These events led to the adoption of the Five Freedoms, and ultimately launched animal welfare as a scientific discipline.

The first scientific journals focusing on animal welfare science were launched in the late 1970s and early 1980s. But the field was still small, and would remain niche. Here, the article mentions some of the key early animal welfare centers, located at the University of Budapest, the Hannover Veterinary School, and the University of Cambridge. In addition to such centers at specific academic institutions, international centers have emerged, like the World Organization for Animal Health (OIE).

To find publications from authors affiliated with animal welfare centers, the authors used Web of Science’s “Address” search function to restrict results to those with the term animal welfare in the organization or department. Narrowing the search in this way returned 4,851 publications, with the earliest dating to 1964 (the same year Animal Machines was released), with the publication rate increasing from 1995 onward.

Many publications came from multiple centers across England, the U.S., and Italy. Canada, Australia, and Germany had fewer centers than these other countries, but theirs stood out as particularly fruitful. Over five hundred publications came from the University of British Columbia alone, for example, and all the scholars with over one hundred publications to their names were from those three countries. Canada also emerged as an important source of both industry and government funding for animal welfare scholarship.

The second search looked more broadly at animal welfare publications, searching for articles with this term in their title or abstract rather than their address. This more comprehensive search returned 21,139 publications – more than four times as many as the first search. This time, the University of Bristol emerged as the most productive center, with 497 publications. Industry was only one of the top 25 funding sources in this search, compared to 11 of the top 25 for the first search. The key scholars were also different in this second search, and on average, the number of publications per author was lower.

Based on their searches, the authors sketch out some advantages and risks of animal welfare centers. A key benefit is that centers can strengthen the discipline and support it in becoming more mainstream. However, it’s vital that centers be independent and collaborative. Given the closer relationship between industry and animal welfare centers, there’s a concern of inappropriate influence creeping into academic research — although the authors suggest that this relationship may go both ways, with researchers shaping the industry’s approach to animal welfare in turn. Generally, they highlight the importance of centering the interests of animals in research, and of thinking carefully about the ethics as well as the science of animal welfare. 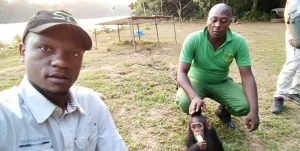 How Faunalytics Is Helping Conservation Efforts In Africa

The story of a conservationist from Cameroon highlights the range of ways Faunalytics' Research Library helps animal advocates from all over the world do their work.