An Animal By Any Other Name

We define “personhood” partly by cognitive ability, but there are other factors to consider.
FULL TEXT The full text of this article is available.
EXTERNAL STUDY This is a summary of an external study.
Summary By: Sara Streeter | Original Study By: Tague, G.F. (2020) | Published: January 21, 2021
Photo by Rick L on Unsplash

This article presents comments prepared for the proceedings of the 2020 International Conference on Sustainable Development. It’s based on the presenter’s book, An Ape Ethic and the Question of Personhood, where the author proposes an attitude shift regarding human preconceptions of animals. He raises the question of whether we should grant great apes personhood, arguing that their land ethic gives them status as moral individuals. In his view, they act as ecosystem engineers, mindfully using the resources in their habitat. Indeed, they coexisted with their environment for about a million years before the arrival of homo erectus. If we grant great apes sovereignty, large tracts of tropical forests would be given over to their care.

For millennia, apes such as orangutans have interacted with forests in ways that promote seed dispersal and tree growth. They have been the good stewards of the earth , as opposed to humans. They demonstrate moral individualism as seen through their self-restraint and environmental control. While apes possess general intelligence once attributed only to humans, cognitive function alone should not determine personhood. Other behaviors, such as conscious care for their environment, must be considered. There does not have to be a reason for ape ecosystem engineering other than an evolved instinct passed down through natural selection.

For example, seeds remain in the orangutan’s gut for up to five days, thus being able to spread via the apes’ movements. When foraging, these apes lightly strip foliage, encouraging tree limbs to regenerate. As they eat, they open spaces for light that encourage new plant growth. They eat a vast variety of plants, thus limiting stress on any one species. Whether or not this is conscious behavior, the outcome is control of the jungle habitat. However, they do not act on their world as if separate from it, but as integral components of it.

As animal advocates, we work for the rights of all animals. While this author uses the word “personhood” to describe his desired status for great apes, he also explains that his use of the word is more figurative than literal. How we name something informs how we think about it. It’s his goal to have us think of apes as “forest persons” rather than as animals. And this is perhaps the most important take-way for advocates. It may be that if we can humanize animals, we can make their suffering more real. The more people identify with animals, the more they will demand an end to their cruelty and exploitation. 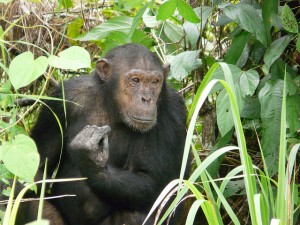 Do chimpanzees understand "iconic gestures," or do they only show interest in gestures that are relevant to them? 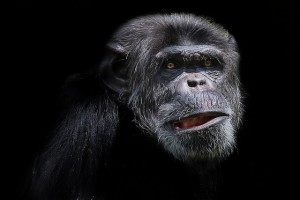 The '3Rs' of animal research - reduction, replacement, and refinement - consistently fail to protect lab animals. Perhaps it's time for a new approach.