This paper explores the possibilities of using alternative, animal-free methods for vaccine development, and shifting away from costly and slow animal-use models.
FULL TEXT The full text of this article is available.
PEER REVIEWED This article has been peer reviewed.
EXTERNAL STUDY This is a summary of an external study.
Summary By: Siobhan Ballan | Original Study By: Busquet, F., Hartung, T., et al. (2020) | Published: March 8, 2021
Photo by Diana Polekhina on Unsplash

With most places currently under some form of quarantine restrictions, it can feel as though our lives are on hold until an effective COVID-19 vaccine is rolled out throughout the general population. Unlike with other diseases, scientists are under pressure from governments and policymakers to resolve the problem as quickly as possible.

Animal testing is costly both in terms of time and money, especially when it requires genetically modified animals to be bred for use. The use of animals therefore doesn’t lend itself to the challenging task of creating and distributing a vaccine within a short timespan. Some countries have carried out clinical trials on humans with minimal safety testing on animals first.

A new paper published in the Archives of Toxicology explores the possibilities of using alternative, animal-free methods to vaccine development. Compared with other medicines, vaccines face particular pricing pressures, due to the processes involved in producing cell mediums, conducting lengthy trials, and carrying out batch release controls. For these reasons, vaccine development isn’t a very attractive area for private businesses to engage in, with only a few major pharma companies involved in the work. Governments and nonprofits often need to step in to support research and production in this area. The majority of vaccine producers are European, while the U.S. makes up more than 40% of vaccine consumption.

Instead of using animals to test vaccines, newer models involve the use of tissue cultures or computer software. Healthy or diseased humans are also used to complement findings from other methods. Whatever the method, new interventions are judged according to their level of efficacy, safety, quality and ability to yield useful drug targets. There is scope for developing animal-free research methods which satisfy each of these four requirements.

There have been two key developments in animal-free testing in Europe. These are the establishment of the European Center for the Validation of Alternative Methods and the area having received substantial funding of around €50 million per year over the last 15 years. Animal testing for cosmetic purposes is banned within the E.U., which has incentivised a shift towards animal-free testing for medical purposes. In the U.S., focusing on animal-free methods has been encouraged for practical reasons such as speed and predictivity. Today, around 90% of research methods in academia and industry don’t involve animal testing. Instead, cell-culture based methods play a major role.

There is no animal disease model for COVID-19. Although it is closely related to coronaviruses found in some bats and reptiles, these species are not suitable for lab research and the pathogen does not follow the same disease pattern as COVID-19 specifically. While certain ape species would traditionally be used in this case, the availability of stem cell technology makes their use somewhat redundant. The use of this alternative technology has several advantages, allowing for quick development and providing more robust and exacting data than could be delivered by using animals.

It is now possible to develop artificial lymph nodes which allow the immune response to disease to be mimicked and studied. This is particularly relevant to COVID-19 research and doesn’t require animals. Antibodies can also be produced using molecular biology techniques, which would have traditionally required animals. Thanks to these advances, COVID-19 research often involves a fast track from initial trials in vitro to testing in human, rather than animal, subjects.

Animal-free methods have seen a steady development over the last 20-30 years, informed by E.U.-funded projects but also by a heightened awareness of the plight of lab animals, which has led to new welfare legislation and a general desire to move away from their use. This shows how the relationship between different stakeholders (academia, government, and the general public) can shape the direction of scientific development. By shining a light on the animal suffering involved in lab testing, advocates can encourage scientists to consider alternatives, especially in light of the practical opportunities offered by stem cell and computational technologies.

Author: Siobhan Ballan
Siobhan is a doctoral researcher in Policy Studies at King’s College London. She is interested in effective altruism and loves to cook for people. Siobhan has been vegan since 2015 and is currently learning German. 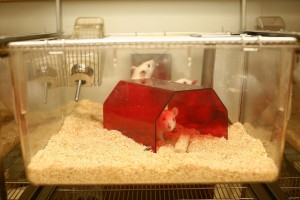