Stereotypy In Dogs: What It Means And How To Address It

A new study looks at stereotypic behavior in companion dogs, and how it might be similar to that shown by zoo and laboratory animals.
ABSTRACT ONLY Only an abstract of this article is available.
PEER REVIEWED This article has been peer reviewed.
Summary By: Mona Zahir | This is a summary of an external study | Published: June 8, 2017
Photo by Flickr user geminicollisionworks

“Stereotypy” can be described as repetitive, seemingly aimless behaviors such as pacing or spinning in circles. Stereotypy has been found in many species, including those kept in zoos and in laboratories. Oftentimes the presence of stereotypy indicates a poor environment or poor welfare of the animal overall. Companion dogs may also exhibit stereotypy. Stereotypy can interfere with the dogs’ day-to-day activities such as eating and playing, and may even harm dogs who compulsively self-mutilate.

This study aims to determine whether dogs who exhibit stereotypy are also more likely to repeat a task that was once rewarding even after the reward stops being given. The phase in which the behavior is reinforced by rewards is called “acquisition.” The phase that comes next, in which the reward stops being given, is called “extinction.” The basic idea here is to see whether greater resistance to extinction is a behavioral trait significantly associated with the trait of exhibiting stereotypy in companion dogs. A significant association between greater resistance to extinction and the presence of stereotypy has been found in various other species such as Asiatic black bears and horses.

Across all breeds, stereotypy was indeed found to be significantly associated with a greater number of nose-touches during extinction, and therefore a greater resistance to extinction. The findings of this study suggest that extinction procedures are not an effective way to manage the behaviors of dogs who exhibit stereotypy. The authors note, however, that “it remains to be seen whether these animals are insensitive to procedures that include reinforcement for alternative behaviors or punishment for the stereotypic behavior.” Further studies could investigate this possibility, or they could focus on finding other behaviors and traits are significantly more common in dogs who exhibit stereotypy. This information may be useful to the people with companion dogs who exhibit stereotypy, as well as to professionals who develop behavior management plans for companion dogs. 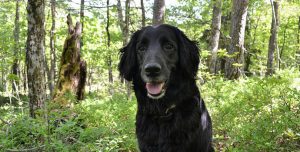 A global review finds that domestic dogs threaten at least 188 species worldwide, and offers some ideas for management and further research. 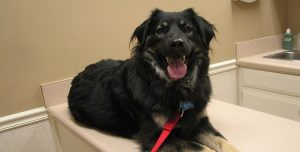 Knowing how much dogs experiences stress when hospitalized can help human companions to reduce dogs' stress during those times.