New research about fish challenges the "primate chauvinism" model of animal intelligence.
FULL TEXT The full text of this article is available.
ANIMAL RESEARCH This article involves research on captive animals, which Faunalytics opposes.
Summary By: Karol Orzechowski | This is a summary of an external study | Published: June 15, 2015
Photo by Flickr user -lucam- 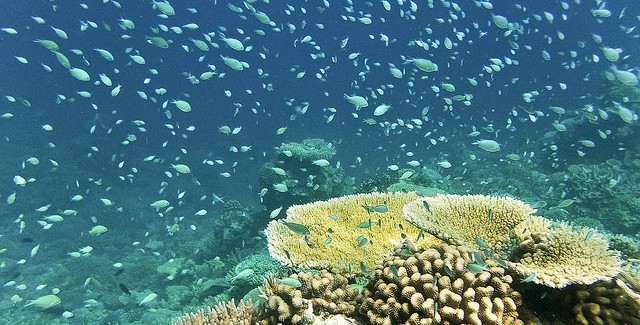 Being a fish isn’t easy. Though not culturally maligned in the same way that certain farm animals such as pigs and cows might be, fish are generally seen as robotic, unintelligent, and perhaps most crucially, unable to feel pain. The general lack of ethics and respect for fish has led to ravenous consumption of a variety of species, leading some species to collapse or near extinction. Even still, outside of animal or environmental advocacy circles, their consumption is rarely questioned, in part because of our cultural conception of them as unfeeling and unthinking creatures. In an article in Nature, however, Alison Abbott summarizes research from the past several years that challenges this prevailing notion. Not only are fish intelligent, they may be so intelligent that they challenge the traditional hierarchy of animal consciousness that looks like a pyramid, with primates at the top.

The article largely revolves around the work of Redouan Bshary, a researcher studying the behavior of coral-reef fish. While snorkelling one day, Bshary saw two different species of fish signalling to each other to coordinate a hunt in an amazing chain of events: “First, the grouper signalled to the eel with its head, and then the two swam side by side, with the eel dipping into crevices, flushing out fish beyond the grouper’s reach and getting a chance to feed alongside.” Why were two top-predators helping each other in this way? That fateful snorkelling trip inspired years of research, all revolving around a central question: “what makes animals cooperate when standard natural selection would predict selfish behaviour to be the norm?” Bshary needed a way to understand this in a systematic way:

He looked around for a system where market forces might be operating. And he found one when Hans Fricke, a fish ecologist working at the Max Planck institute, told him the strange tale of barrier-reef fish that operate a remarkable system of cooperation. ‘Cleaner’ fish, such as the brightly striped wrasse, will nibble parasites off the skin of ‘client’ fish in small coral territories known as cleaning stations. Bshary realized that this provided a perfect situation in which to test the market theory because client fish seemed to be trading food — in the form of parasites — for a skin-cleaning service.

This led Bshary to learn to scuba dive, to be able to do longer dives and make extensive field observations. The results were astonishing:

Bshary also observed a range of other social behaviours that had never been seen before in fish. He saw that unsatisfied clients sometimes punish cheating cleaners by chasing them around, and that this punishment makes these fish less likely to cheat. He saw cleaners ingratiating themselves with certain clients: they gave preference to visiting fish such as groupers, rather than the smaller, local fish that did not have the option of going elsewhere. He found that the cleaners cheated less when they were being watched by other potential clients — a sign that they were buffing their reputations. And he saw reconciliation: if cleaners behaved badly, they then massaged the backs of offended clients with their pelvic fins.

Though much of the research that Bshary conducted was done in the wild, he would eventually capture fish, observe them in a laboratory, and release them back into the wild. Though it is not discussed as such in the article, it is obvious that the fish were deeply affected by captivity. Abbott notes that “some fish took a month just to adjust to the tanks,” before Bshary could observe them acting “naturally.”

What is almost as interesting as Bshary’s observations, however, is how the research has been received more broadly, and how much it has challenged prevailing notions of animal intelligence. For a long time, the “social brain” theory had ruled over the animal kingdom, placing primates on the top: “Only primate brains, the theory says, have the depth of cognitive analysis necessary to cooperate, deceive and solve other problems in a social world.” Bshary was turning this theory on its head, as his results “meshed with those emerging from studies on the social behaviours of other animals, ranging from elephants to birds.” The article even quotes leading primatologist Frans de Waal about the impact of the research: “Primate chauvinism may now be poised to decline, thanks in large part to Bshary’s fish work. They now really do have to take on board that most species are going to have a type of smart intelligence.”

For animal advocates, this type of cognitive information can be invaluable in advocating for fish species. For better or worse, many people are compelled to expand their circle of ethics to animals they feel are more similar to humans, and this research shows many ways that fish and human behavior dovetail. If this type of research is challenging the prevailing notions of animal intelligence within behavioral science, it could surely have an impact more broadly. The challenge will be, as it has been for years, for advocates to communicate the amazing intelligence of fish in a way that puts them ethically on par with other animals that we may relate to more immediately. 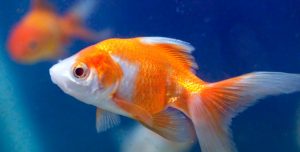 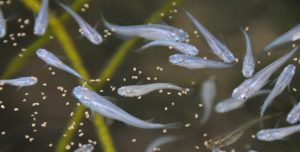 A study of medaka fishes finds they show a complex form of facial recognition - an ability considered important for shaping animal societies. 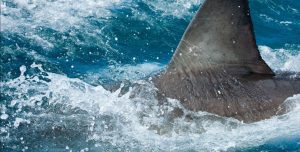 A U.K. survey finds people are well-informed and positive about sharks, but unaware of negative fishing impacts, or paths to conservation advocacy.