This plea for conscious ethics in veterinary medicine is a reminder that some ethical issues never really go away.
ABSTRACT ONLY Only an abstract of this article is available.
PEER REVIEWED This article has been peer reviewed.
Summary By: Faunalytics | This is a summary of an external study | Published: November 30, 2015
Photo by Flickr user armymedicine 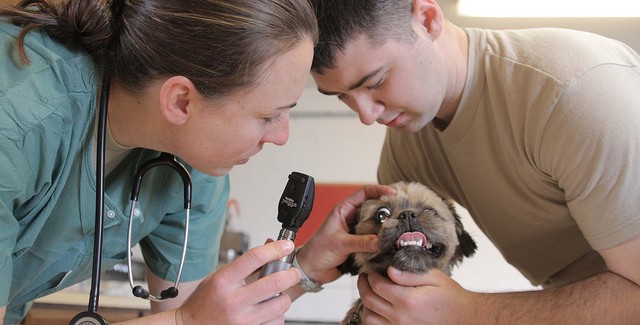 The ethical issues surrounding the practice of veterinary medicine are far from simple, as anyone who has lived with a companion animal that needed veterinary care understands. While there is little doubt that the majority of veterinarians go into practice to help animals, they also typically run private businesses that need to produce enough revenue to pay for staff, supplies, equipment, and upgrades. Further complicating things, companion animal guardians are not always deeply committed — financially or emotionally — to the well-being or their companions. In the view of some people, these variables have led to the practice of veterinary medicine being fraught with ethical contradictions that can run deep.

This archival research paper written in 1985 looked at the ethics of veterinary practice. Though the article itself is an older one, its observations are relevant and resonant today. The paper’s author states bluntly that, “a veterinary ethics of the human-companion animal bond… does not yet exist.” The article is described as “a plea” for a better approach to veterinary ethics, not only for reasons of morality but because “self-interested expediency – perhaps even the survival of veterinary practice as we now know it – require that the profession nurture and develop a serious veterinary ethics of human-companion animal interaction.” The author describes how veterinarians have long sat out of ethical discussions, and thus have missed out on giving important valuable scientific opinions on issues facing companion animals. “Moral choices are inescapable,” the author notes, and “it would be wrong to think that, because veterinary medicine is a science, you need not make any moral or value judgments.”

The author offers a hypothetical example for veterinarians to consider, where the human companion of a dog with medical and behavioural problems is requesting that the dog be euthanized rather than trying to treat him. The author notes that:

Conversely, the author notes that if a veterinarian were to try to persuade the client to attempt various treatments before euthanasia, then this would also involve “asserting your belief in a number of ethical views.” In other words, there are ethical implications for all sorts of veterinary decisions (or indecision), and so it would be better that we acknowledge those dynamics rather than pretend they do not exist.

Interestingly, one of the reasons the author says that veterinarians should take the lead in making ethical decisions is to preclude “animal rights philosophers” such as Bernard Rollin and Tom Regan from exerting too much influence over the ethical evolution of veterinary medicine. The author’s assertion isn’t necessarily based on objections to their philosophy, but rather that such philosophers do not have medical expertise with animals and that science should guide veterinary ethics as much as possible. The author’s position is further clarified by a mention that veterinarians should take the lead in professional ethics because “it is also generally in the profession’s self-interest to take veterinary ethics seriously.” In a two-year period before this study was published, the number of lawsuits against veterinarians reported to the American Veterinary Medical Association’s Professional Liability Insurance Trust increased by 20%.

For companion animal advocates, the types of ethics discussed in this article are no less relevant today, even though the article is several decades old. The kinds of ethical quandaries discussed here are ones that have been a part of the veterinary profession for many years. And as long as the profession remains a mostly private and for-profit enterprise, there will be some tension between pleasing human “clients” and doing what’s right for companion animals. This article can be useful not only for advocates and academics who are interested in the history of veterinary ethics, but also for people who want a sense of the depth and breadth of how many difficult choices are inherent in veterinary medicine. “Will you respond? Will you engage in serious ethical thinking that clarifies, informs, and proclaims the values of your profession?”, the author asks. “These questions are provocative. They are also unavoidable.”