The Effectiveness Of Armed Conservation

"Armed conservation" may be necessary in situations where violent poaching is prevalent. This article examines the dynamics of "threat economy."
ABSTRACT ONLY Only an abstract of this article is available.
PEER REVIEWED This article has been peer reviewed.
Summary By: Faunalytics | This is a summary of an external study | Published: September 6, 2016
Photo by Flickr user enoughproject 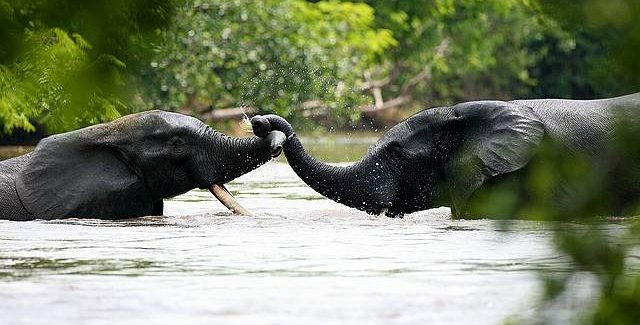 When it comes to wildlife conservation policies, advocates and policymakers are increasingly seeking to balance the needs of wild animals with those of local communities. This paper, published in Geoforum, examines such relationships by exploring the dynamics involving authority figures and local communities. The results add yet another layer to the complex factors involved in conservation efforts.

In particular, the author seeks to challenge scholarly accounts that portray armed conservation initiatives as conflicts between all-powerful authority figures and victimized local populations. To do so, she explores the history and current state of armed conservation in the northeastern parklands of the Central African Republic (CAR). Largely owing to its remote location and sparse population, this area has historically been characterized by two overarching dynamics. These include large portions of protected land area, and the absence of government influence given that ruling authorities are located far away.

Since the 1930s, armed conservation efforts in this part of CAR have been carried out by a number of authorities. This includes French officials (when it was under French colonial rule until 1958), CAR government officials from the Ministry of Water and Forests (headquartered on the other side of the country), a large-scale EU-sponsored conservation initiative, and even individual safari hunting guides. The author shows how, over time, relationships between authorities and local communities weren’t simply those of power and submission, but involved what she terms “threats and hiding.” In such a dynamic, people from both groups are able to influence each other using the threats of violence or by hiding and even organizing rebellions.

For example, anti-poaching guards (usually local workers) can serve as threats to officials who feel powerless to control them and communities who do not obey them. Local communities may retaliate by intimidating small anti-poaching units. In one case, locals sabotaged efforts by a conservation biologist to track animals. Contrary to many traditional accounts, people in the region are not motivated by having power over others, but by the pursuit of status and income. The author concludes by stating, “anti-poaching actors or other would-be users of the space are (un)able to or (un)interested in authority as a mode of expanding control over other people.”

In other words, anti-poachers aren’t interested in trying to use their position to gain power. While the article focuses on relationship dynamics rather than actual conservation outcomes, it offers a reminder for conservation advocates and policymakers of the many factors to consider when making conservation decisions.

Regular hunting moratoriums may be a promising way to mitigate concerns about lion survival, sex ratios, and age distributions.