This paper examines the attitudes and beliefs of those who purchase animals to identify means to promote adoption.
EXTERNAL STUDY This is a summary of an external study.
Summary By: Faunalytics | Published: January 3, 2008
Image by Pixabay user tranmautritam

Family-type bonding appears to be quite high between people and their companion animals.

The disadvantages to obtaining a companion animal from a shelter include the possibility that the animal was a stray.

Of respondents who purchased their dogs from breeders, companion animal stores, and other “Non-rescue” sources, 38% said they would switch.

Why respondents who “bought” their dog chose not to adopt (Total population, N=132):

Could anything be done to change purchase decision, for those who bought from for-profit places (Total population, N=124):

This study did not indicate that purebred dogs have lower uncertainty in costs and benefits, despite the fact that one primary reason people desire purebreed dogs is to reduce uncertainty. The results also indicate that if shelters could better reach people looking for purebreed dogs or puppies, the number of adoptions would be greatly increased. Other ways of increasing adoptions would be to address issues of selection, general quality, or marketing to impulse buyers. Financial incentives to adopt could also sway buyers, but most would not switch on basis of price alone. 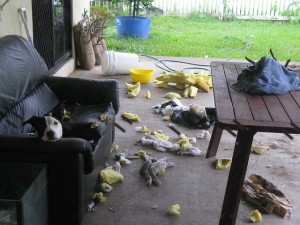 Separation anxiety is a common behavior problem in recently adopted shelter dogs, and may be difficult to treat using only basic, interventional information.