The Visitor Effect in Petting Zoo-housed Animals: Aversive or Enriching?

This study examined how the behavior of animals in a petting zoo is affected by the presence of visitors.
ABSTRACT ONLY Only an abstract of this article is available.
ANIMAL RESEARCH This article involves research on captive animals, which Faunalytics opposes.
Summary By: Kathryn Asher | This is a summary of an external study | Published: December 23, 2013
Image by Flickr user gisele13 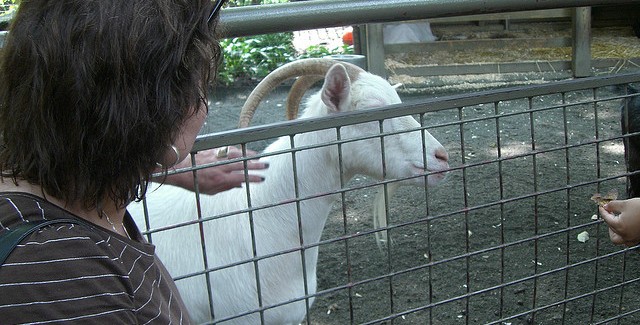 This study examined how the behavior of animals in a petting zoo is affected by the presence of visitors.

“Two studies were carried out on the effect of visitors on mixed-breed goats, llama, and Vietnamese pot-bellied pigs housed in a petting zoo display within a safari park. In the first study we investigated the effect of the presence and density of visitors on the animals’ behaviour and in the second, the effect of animal grooming by the visitors. We hypothesised that the animals’ behaviour would be negatively affected by presence of visitors compared to periods of their absence, but this hypothesis was not fully supported by the data. Goat and llama behaviour was unaffected by the presence of the public, while the pigs showed decreased inactivity and social behaviour, both affiliative and aggressive, when visitors were present.

All three study species exhibited increased levels of non-aggressive interaction with the public when visitor density was higher but the level of avoidance or aggression towards visitors was not dependent on density. The goats were less often in physical contact with other goats and less likely to be within proximity of a non-conspecific when visitor numbers were high, whereas the pigs showed decreased feeding, a behaviour that constituted a majority of their activity budget. Species differences were observed in the proportion of samples the study groups interacted in a non-aggressive manner with visitors, goats being most likely and llama the least likely to engage in this behaviour. In the second study visitors were provided with a grooming tool and asked to groom the animals, but no significant behavioural change was observed in either goats or pigs as a result. Visitors groomed goats, but not pigs, more than they interacted with them in non-grooming interactions, and goats, but not pigs, responded less to grooming as visitor density increased.

Although significant behavioural changes in all three study species were associated with either visitor presence or density, the low levels of avoidance of visitors, visitor-directed aggression, or animal-directed aggression, suggest the welfare of the study animals was not profoundly impacted by visitor-related stimuli. Furthermore, there was no evidence that grooming by the public was enriching for the animals. The species differences reported here do suggest, however, that Vietnamese pot-bellied pigs and llama are more sensitive to visitor pressure than goats and particular attention to their welfare may be necessary when they are housed in petting zoo displays.”

There is still much room for improvement in Latin American veterinary teaching. University instruction needs to remain practical and useful as it moves forward.