The Implications of Husbandry Training on Zoo Animal Response Rates

This research explored the efficacy of training and its impact on keeper-animal relationships, concluding that training can reduce animals’ fear of humans and may contribute to positive keeper-animal relationships and improved animal welfare.
ABSTRACT ONLY Only an abstract of this article is available.
ANIMAL RESEARCH This article involves research on captive animals, which Faunalytics opposes.
Summary By: Kathryn Asher | This is a summary of an external study | Published: December 19, 2013
Photo by Flickr user wcdumonts 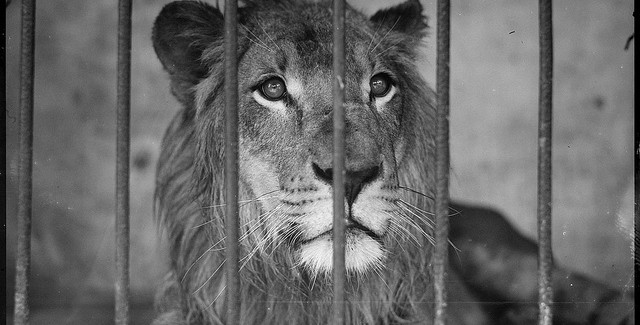 “Positive reinforcement training (hereafter known as training) has increasingly been adopted in zoos, to facilitate complex veterinary procedures without sedation or restraint and support husbandry requirements. However, empirical studies to establish the efficacy of training or investigate its impact on keeper–animal relationships are scarce; this was the topic of the current investigation. Study animals were classified as formally trained (FT) partially trained (PT) or untrained (UT). Eight black rhinoceros (2FT, 2PT & 4UT), twelve Sulawesi crested black macaques (4FT, 4PT & 4UT) and eleven Chapman zebra (4FT, 2PT & 5UT) were studied in 6 zoos across the UK and USA. Subtle cues and commands provided by keepers directed towards the animals were identified and the latency between these and the respective behavioural responses (cue-response) were recorded. Animal personalities were also assessed using trait ratings completed by keepers for each animal. Social species (zebra and macaques) responded quicker to cues than the solitary species (rhino; F2 =13.716, p <0.001). FT animals responded quicker to keeper cues than PT and UT animals (F2,22= 6.131, p <0.01). There was no significant difference in the cue-response latencies according to personality traits (Z =−1.576, p >0.05). Data suggested that trained group living animals had reduced latencies when reacting to keeper’s cues, regardless of their personality. If we consider short cue-response latencies to be indicative of low fear, then we suggest that training can potentially reduce animals’ fear of humans thus could contribute to positive keeper–animal relationships which in turn could lead to improved animal welfare.”