Children and Animals: Loving Some Species More Than Others

This research shows that 3-6 year old children tend to follow the "similarity principle" of animal preference, with some notable exceptions.
ABSTRACT ONLY Only an abstract of this article is available.
PEER REVIEWED This article has been peer reviewed.
Summary By: karol orzechowski | This is a summary of an external study | Published: August 10, 2015
Photo by Flickr user masstravel 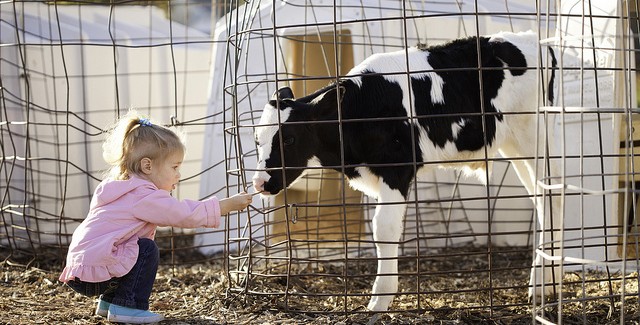 Nonhuman animals are part of all of our lives in one way or another, no matter what our age. Whether as companions at home, wild animals seen in the environment, or farmed animals used for food, most of us have lives that are intertwined with animals in some form. Understanding why we value and care about some animals more than others has become an important field of research, attracting the efforts of top scholars from around the world. Some researchers have tried to go back as early as possible, to understand the process of how we begin to think about animals, by studying the thoughts of children and adolescents. The question of how much our attitude is “nature” or “nurture” is of increasing interest.

This paper looks at the attitudes of kindergarten aged children. The authors remind us that “contact with animals may affect children’s wellbeing and impact upon developmental trajectories.” Research with adults has suggested that humans prefer (or show greater concern for) animals that remind us of ourselves, whether physically, biologically, or behaviorally, such as primates, dolphins, dogs, and other “charismatic megafauna.” Furthermore, animals that have been culturally recognized as “useful or beneficial” to humans tend to be regarded more highly than animals that may be more neutral, or even dangerous to our well-being. This is a fairly logical attitude for adults to have, but do children feel the same way?

This study presented almost 300 Italian, 3-6 year old children with a series of two animal pictures at a time, and asked them to choose which animal they preferred. The aim was to understand if children also preferred animals that are more similar to humans, and to see if they would favor domestic or wild animals. The study paid close attention to gender, as it has been “recognized as one of the most important demographic variables affecting attitudes and behavior toward animals.” The researchers took great efforts to ensure that children felt comfortable and safe during the study, as they noted that being presented with images of certain animals could bring up potentially difficult memories or past experiences for the children.

What they found was an “emergence” of children’s preference for higher-order species, and for domestic over wild animals. There was an unbalanced gender distribution of preferences for some species, “mostly for animals reported to induce disgust/fear responses in humans.” The authors note that their results are generally in line with the “similarity principle,” with mammals ranking highly, followed by birds and fish, and reptiles receiving a “moderate number.” Though invertebrates were generally ranked the lowest on the scale, there were some exceptions – butterflies were one of the favorites (along with dolphins and horses), and snails still ranked comparatively high to other invertebrates. The gender breakdown of preferences showed marked differences. The “boys show[ed] a higher appreciation of animals which evoke fear, such as alligators, snakes, and sharks, and biting and stinging invertebrates (e.g., scorpion, spider, beetle, bee),” while girls showed a greater preference for “butterfly, ostrich, hedgehog, and sea lion, which seems to confirm a more aesthetically oriented attitude to animals.” Of course, there is also a possibility that the boys had an aesthetic preference for the aforementioned animals as well, but that is not considered by the researchers.

One of the “most unexpected results” of the study was that both boys and girls had a high preference for the image of a mouse. This is surprising because, “together with snakes and spiders, mice usually rank lowest on preference scales, as they evoke fear and relatively little affection or concern.” In this study, mice were one of the top-preferred animals, at the same level as the dog. The researchers were unsure of the reasons for this, but speculated that it could be because of the research structure, some kind of “cuteness perception,” or something else entirely.

Overall, the study suggests that children as young as 3 years old show a preference for higher-order species and for “aesthetically appealing and familiar (mostly domestic) animals.” Though there are some exceptions, this falls in line with studies of adult preferences of animals, but it is “not easy” to understand how different variables might be affecting children’s perceptions. Why and how we form our opinions of animals is, of course, a question that greatly concerns animal advocates, and many of us tend to think of children as more innocent or compassionate than adults. The authors state that “educational programs to foster knowledge of, and positive attitudes toward, animals should be directed at children before they enter primary school, since most of the negative attitudes emerge early on in life.” They note that building positive attitudes of animals at an early age is “of primary importance because of its impact on animal welfare” and in developing healthy and safe child-animal relationships. Humane education needs to start early, and this study should be a call for advocates to redouble their efforts with younger kids.

Marta, B., & Francesca, C. (2015). Attitudes toward Animals among Kindergarten Children: Species Preferences. Anthrozoos: A Multidisciplinary Journal of The Interactions of People & Animals, 28(1). pp. 45-59.

If you're working to change hearts and minds about animal welfare, it’s critical to know that the messenger, not just the message, matters.