Authors of a Danish study have found that certain inherent behaviours in minks are unable to be enacted due to the poor conditions found in fur farms.
ABSTRACT ONLY Only an abstract of this article is available.
PEER REVIEWED This article has been peer reviewed.
EXTERNAL STUDY This is a summary of an external study.
Summary By: Faunalytics | Published: April 18, 2014
Image by Flickr user Dzīvnieku brīvība

The authors of this Danish study theorized that hunting and chewing behaviors are inherent to minks, and are insufficiently expressed in a farm environment, leading to undesirable stress-related behaviors. They provided chewing ropes, chewier feed, both, or neither to 4 groups of 50 minks each. Fur-chewing was reduced by either chewing ropes or chewier feed. Pacing was reduced only by chewier feed. The authors suggest several possible reasons for these results and call for further research to better understand mink behavior and needs.

“We investigated whether provision of additional appetitive and consummatory elements of foraging reduces baseline stress and abnormal behaviour – in terms of fur-chewing andstereotypic behaviour – in farmed mink. We studied 200 juveniles (n = 100 females and 100 males) during the 5-month growth period with plenty of feed, and subsequently the females as adults during the 2-month feed restriction period before mating. The mink were distributed in four equally sized groups: (i) FARM, conventional finely ground feed (P = 0.044) and chunky feed reduced stereotypic behaviour (P = 0.038) and fur-chewing in female mink (P = 0.019). During the season of feed restriction, the wear/tear of biting ropes increased. Females on the chunky diet had a higher concentration of faecal cortisol metabolites (P = 0.033), probably due to a more severe slimming resulting in a 6.2% lower body weight (P = 0.006) than the mink on the finely ground diet; still the chunky diet reduced time spent in pre-feeding stereotypies (P = 0.001). In the restrictively fed females, fur-chewing was reduced both by access to biting ropes (P = 0.005) and chunky feed (P = 0.007). Consequently, 54% of group FARM mink displayed fur-chewing compared to 21% in group BOTH. In conclusion, stereotypic behaviour was reduced by provision of chunky feed, increasing the consummatory element in daily foraging. Fur-chewing was reduced upon access to either biting ropes or chunky feed in female mink throughout the study. Our findings support frustrated foraging, mainly consummatory, behind abnormal behaviour.” 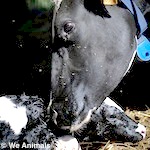 In this study, newborn Holstein calves were separated from their mothers shortly after birth and isolated in a pen for four days. Half of the calves continued in solitary housing, while the other half shared a pen with another calf. Calves were tested for ability to change tactics when a situation changed at four weeks, and to habituate to a new situation at seven weeks. Solitary-housed calves were slower to adjust to a change in the first test, and never got acclimated to a new object in the second test, suggesting that housing without social contact negatively impacted their cognitive development.