2009 Aerial Survey Of Feral Horses In The Australian Alps

The feral horse population in the Australian alps is growing at a significant rate with experts predicting it might reach almost 14,000 by 2012, which may have environmental implications.
FULL TEXT The full text of this article is available.
Summary By: Faunalytics | This is a summary of an external study | Published: March 30, 2010
Image by Pixabay user skeeze

A survey of the feral horse population in the Australian Alps national parks estimates the population to be about 7,679 horses, which represents an annual increase of 22% from 2003. Experts predict the population will reach over 13,800 horses by 2012, which may have environmental implications.

The feral horse population in the area is growing at an increasing rate. The 2009 estimate was the highest recorded since monitoring began, despite some fluctuation from 2001. Feral horse populations were relatively small when they were first released in the mid-1800s and the evidence suggests that much of the population growth is recent.

Population size decreased dramatically between 2001 and 2003 as the result of extensive wildfires. However, since 2003 there have been few growth-limiting factors and the population is now growing at the maximum theorized rate. Based on population estimates, this research recommends the continued monitoring of feral horse populations in the area with re-analysis of the data. 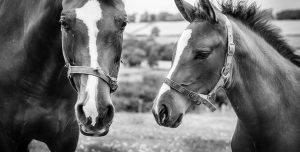 Horses And The Effectiveness Of Qualitative Behaviour Assessment

QBA is a promising tool to complement animal welfare assessments in situations with multiple emotional dimensions, both positive and negative.