The Welfare Of Free-Ranging And Unsocialized Cats

Are all free-ranging and unsocialized cats in poor health and consistent pain? This study from Denmark suggests that, fortunately, this may not be the case.
FULL TEXT The full text of this article is available.
PEER REVIEWED This article has been peer reviewed.
ANIMAL RESEARCH This article involves research on captive animals, which Faunalytics opposes.
EXTERNAL STUDY This is a summary of an external study.
Summary By: Thyl Moors | Original Study By: Thuesen, I. S., Agerholm, J. S., et al. (2022) | Published: July 28, 2022
Photo by Abdullah Öğük on Unsplash

The domestic cat is one of the most common companion animals. While some live in our homes or gardens, others remain free and don’t live in human company. Moreover, some of these free-ranging cats aren’t socialized, are afraid of us, and therefore can’t be easily placed in homes.

Some people consider unsocialized cats to be problematic, particularly because they may relieve themselves in public places, be noisy, harm or frighten other cats that have access to the outdoors, and hunt various animal species — thus representing a problem for biodiversity. They can also be perceived as sources of disease transmission. Finally, there is a concern that  free-ranging and unsocialized cats are generally unhealthy and in pain.

For these reasons, many countries are implementing initiatives to control their populations. Sometimes cats are captured, sterilized, and then released back into their natural environment. Other times they are placed in shelters for adoption. And in the worst cases, especially when they are unsocialized, they may simply be euthanized, even when they are healthy and able to live a normal life. Denmark, for example, allows NGOs to capture and euthanize cats without guardians under the conditions that a veterinarian is present and that local municipalities allow it.

This study focused on the general health of free-ranging and unsocialized cats. One objective was to determine whether euthanizing these cats under the pretext of freeing them from a miserable life is justified or totally unfounded. To do this, they studied the corpses of 598 free-ranging and unsocialized cats from all over Denmark. These cats were provided by NGOs that had captured and euthanized them in 2019, in order to regulate their populations; it’s important to note that the cats would have been euthanized with or without the study, so the authors were not responsible for their deaths.

The authors analyzed each corpse in order to assess several health components and classify them according to the impact on their welfare: none, minor or major. The components evaluated were weight, viral infections such as feline immunodeficiency virus (FIV) and Feline leukemia virus (FeLV), gross lesions, and the presence of ectoparasites (lice, fleas, ear mites and ticks). For example, normal weight or being moderately overweight were considered to have no effect on welfare, thinness was seen as having a minor impact, and obesity and emaciation were viewed as having a major impact on welfare.

485 of the cats studied (81%) were adults, with almost as many males as females. Of these, 64 were neutered (11%). In their results, the authors found that 83% were normal weight, around 6% were moderately overweight, and 11% were thin. Only two cats were emaciated, and none were obese. Regarding viral infections, 9% were positive for FIV and 1% for FeLV; none of them suffered from lesions related to these infections. For gross lesions, 28% had some, especially on the teeth, which were sometimes broken or missing. Finally, for ectoparasites, 16% had lice, 12% had fleas, 7% had ear mites, and 4% had ticks.

The authors found that 83% had no problems or minor problems that caused only minimal impact on their welfare. 15% had one major problem, 2.3% had two, but none had three or more. With their results, the authors concluded that the majority of free-ranging and unsocialized cats in Denmark have a health status that does not jeopardize their welfare. Moreover, they pointed out that even if some health problems appear to be more frequent in these cats than in cats that are not free-ranging, some problems (such as obesity) are far less frequent.

Although the results can’t necessarily be generalized to other regions and countries, this study provides evidence that free-ranging and unsocialized cats may be in good health. Specifically, the cats in this study didn’t have many major health problems related to their welfare. Thus, the pretext of euthanizing them to free them from a life of suffering is not justified. Animal advocates can use this evidence to call for more humane management practices that don’t involve euthanization.

This U.K. study examined the challenges in ensuring that sterilization programs are achieving the desired cat population effects. 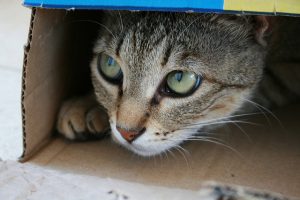 Evidence shows that having a hiding place is a vital stress reducer for cats, in shelters as well as at home.