This study analyzed the social network of wild giraffes in Etosha National Park, Namibia, over a period spanning 6 years, highlighting the importance of socialization and indicating potential negative effects of keeping captive giraffes in isolation.
ABSTRACT ONLY Only an abstract of this article is available.
Summary By: Kathryn Asher | This is a summary of an external study | Published: November 4, 2013
Image by Flickr user roger smith 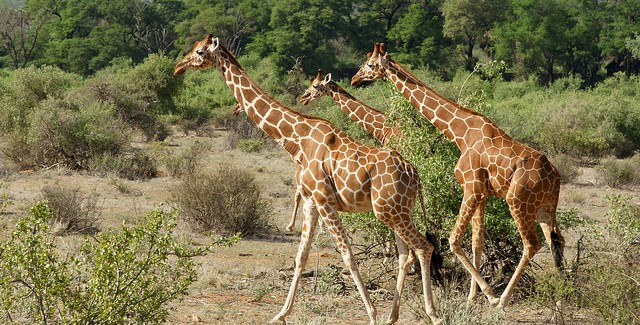 This study analyzed the social network of wild giraffes in Etosha National Park, Namibia, over a period spanning 6 years, highlighting the importance of socialization and indicating potential negative effects of keeping captive giraffes in isolation.

“Long-term studies of sociality in wild animals are rare, despite being critical for determining the benefits of social relationships and testing how long such relationships last and whether they change as individuals age. Knowledge about social relationships in animal species that exhibit fission-fusion dynamics can enhance our understanding of the evolution of close social bonds in humans, who also have a fission-fusion social system. We analysed the social network of wild giraffes, Giraffa camelopardalis, in Etosha National Park, Namibia, from 1102 records of group compositions, including 625 individually identified individuals, spanning 6 years. We found that giraffes, which exhibit fission-fusion sociality, formed a cohesive society with short path lengths across the network that may facilitate passive information sharing about resource availability. Male and female giraffes appeared to contribute equally to the network structure, based on similarities between the sexes for five network metrics. However, using lagged association rates, we found that long-term relationships spanning 6 years were evident among female giraffes, but not males, which may be explained by sex differences in ranging patterns and reproductive priorities. Five network metrics of females were compared between two adult age cohorts to investigate whether females’ ages influenced sociability. As younger females reached adulthood, they associated with greater numbers of females and increased their network strength and social connectivity, perhaps because of dispersal. Our study reinforces the value of network analysis and long-term studies for examining the social systems of wild animals.”

Scientists find bumblebees show behaviors that could be interpreted as optimism, regulated by dopamine. The findings support some level of insect sentience.