Half A Century Of Global Shark And Ray Fishing: Counting The Ocean’s Casualties

The threat of extinction for global shark and ray populations grows every year. International commitments to reduce this threat have not been met, and we are losing more fishes with each passing day.
ABSTRACT ONLY Only an abstract of this article is available.
PEER REVIEWED This article has been peer reviewed.
EXTERNAL STUDY This is a summary of an external study.
Summary By: Shaileen McGovern | Original Study By: Pacoureau, N., Rigby, C.L., Kyne, P.M. et al. (2021) | Published: January 4, 2022
Photo by Jakob Owens on Unsplash

The call for more strict fishing limitations and bans from scientists is getting louder. We need to reduce global fishing to fight the extinction of our shark and ray species.

In this study, a team of researchers from across the globe (namely Canada, Australia, the U.K., Italy, South Africa, the U.S., Brazil, Sri Lanka, New Zealand, the U.A.E, Taiwan, and France) are urging us to take immediate action to save our sharks and rays from the brink of extinction. The constant fishing that our oceans have experienced over the past 50 years is destroying their populations and ecosystems.

This call to action comes from research the team completed to answer:

This study is the first to gather data from across the world and present a global picture of how fishing is affecting the ocean’s shark and ray populations. Unfortunately, the study’s analysis shows us that shark and ray numbers are dwindling, current government efforts are not enough, and we must take immediate action to save them from extinction.

The global fishing problem is well documented, with millions of sharks and rays being caught and sold every year for their meat, fins, gill plates, and liver oil. Peaking in 2003, global catch sizes were estimated to have reached between 63 to 273 million individuals. Even though catch sizes today are smaller, current fishing practices are still unsustainable. Shark and ray populations are slow to grow, plus their generations are long, which makes them naturally susceptible to fishing pressure. It is very difficult for these species to recover and replenish naturally when so many individuals are needlessly killed on a daily basis.

In an effort to combat “unsustainable overfishing,” the United Nations member states made a ten-year commitment (from 2011 to 2020) called the ‘Decade of Biodiversity’ to improve food security by stopping biodiversity loss in our oceans. To measure the rates of biodiversity loss, and how effectively member states committed, the researchers used two gold-standard methods to measure changes in shark population numbers, and their extinction risk over time: the Living Planet Index (LPI), and the Red List Index (RLI). These indexes are used by conservation biologists to track progress (or lack thereof) toward global sustainability goals (i.e. the Aichi Biodiversity Targets, and Sustainable Development Goals).

The team measured trends using 57 datasets for 18 shark and ray species, and had data available from the 1970s to 2020 to make their estimates. The LPI and RLI results painted a grim picture. They found that since 1970, global numbers of sharks and rays have declined by 71%, caused by an 18-fold increase in fishing over the last 50 years. Worryingly, this decline is happening at a rate of almost 20% per decade. The researchers warn us that fishing has increased extinction risks so much that if we continue to exploit our fish populations, three-quarters of our shark and ray species will be threatened with extinction. Clearly, not enough is being done today to help our oceans’ sharks and rays.

Animal advocates can take action that influences governments to adopt, use, and enforce policies that reduce this destructive fishing of our oceans. The researchers recommend specific examples of policies that governments should put in place to combat this crisis, such as science-based catch limits and reduction of bycatch by fishers. They emphasize that these policies should be used not just at the national level, but also at the international level to help paint a brighter picture for the future – one where our ocean’s fish populations, and the ecosystems depending on them, do not collapse.

The group highlights that previous policy changes, including strictly enforced quotas and retention bans, have helped white shark and hammerhead shark populations recover in recent times. So, there is still hope for the ocean’s sharks and rays, provided we act swiftly when it comes to influencing change at the governmental and policy level.

Author: Shaileen McGovern
Shaileen McGovern is a Senior Scientist in Bioinformatics and Quantitative Genetics who is passionate about science communication, animal health, and all things data. She is a former grant writer, data analyst, molecular biology lab technician, and strategic alliance manager in the animal health and genetics space. With her MSc in Bioinformatics and Computational Biology, and BAgrSc in Animal Science, her goal is to pivot her career to use her skills for good in the animal advocacy space (especially in the alternative protein space). She lives in Kildare, Ireland, and spends her spare time reading, running, bouldering, and with horses.

This article looks at the concept of positive welfare – not just the absence of negative states, but the presence of positive ones – and how it can be applied to improve the lives of captive fishes. 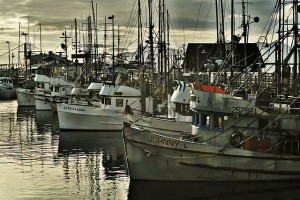 New analysis indicates that global fishing may be severely underestimated. What does that mean for fish?