The General Social Surveys have asked questions on a multitude of different topics, including attitudes towards the concept of moral rights of animals and testing on animals for medical reasons.
ABSTRACT ONLY Only an abstract of this article is available.
Summary By: Faunalytics | This is a summary of an external study | Published: January 11, 2008
Image by Unsplash user Ray Hennessy

Evaluates attitudes relating to the general concept of the moral rights of animals, and specifically to testing on animals for medical reasons.

The General Social Surveys (GSS) were designed as part of a data diffusion project in 1972. The GSS replicated questionnaire items and wording in order to facilitate time-trend studies. This data collection includes a cumulative file that merges all 25 General Social Surveys into a single file containing data from 1972 to 2006. The 2006 survey was composed of permanent questions that appeared on each of the previous surveys, rotating questions that appeared on two out of every three surveys (e.g. 1973, 1974, 1976), and a small number of occasional questions that occurred in a single survey. 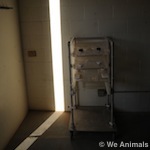 This paper considers how and why current protections for research with humans who cannot consent (such as children and those with severe dementia) can apply to nonhuman primates. Navigating the slippery and often contentious questions around moral significance of nonhuman animals, the author gives compelling examples of research projects where using nonhuman primates would be clearly unacceptable. These are then used as a baseline for determining a general principle that "individuals who are unable to consent should be enrolled in nonbeneficial research only when, at the very least, there is sufficient reason to believe that the potential benefits of the research justify the risks it poses." Though the author does not make claims around what might constitute justifiable benefits, he does offer interesting possibilities for how nonhuman primates can assent / dissent from particular research, even if they cannot officially "consent."

Chimpanzees As Vulnerable Subjects In Research

This article argues that chimpanzees used for research should be given increased protections and larger ethical considerations.