Will Cultivated Meat Be Sustainable In The Future?

Cultivated (lab-grown) meats are seen as a more sustainable alternative to animal meat. But can they be cost-effective and environmentally-friendly options in the long term?
FULL TEXT The full text of this article is available.
EXTERNAL STUDY This is a summary of an external study.
Summary By: Devatha Nair | Original Study By: Schwartz, E. (2021) | Published: September 2, 2022
Photo by Julia Koblitz on Unsplash

Cultivated Meats (CM), also called lab-grown meats, are a promising alternative for consumers who are willing to reduce meat consumption but don’t want to give up animal products. CM are manufactured by taking small cells or muscle samples from a living animal and multiplying them exponentially in a rich media with proteins that allow them to grow. CM production is seen as more efficient than traditional animal meat, as it eliminates the need for raising and slaughtering countless farmed animals. However, less is known about the long-term environmental costs and economic feasibility of CM production.

The authors of this study examine the environmental impacts, costs, and knowledge gaps in operating a commercial-scale CM production facility in 2030. Data from five CM manufacturers and over 15 companies involved in CM production were used to build life cycle assessment (LCA) and techno-economic assessment (TEA) models. The carbon footprint of CM production from start to finish for 1 Kg (2.2 lbs) of product was compared to the production of the same amount of animal meats (such as beef, pork, or chicken) and traditional plant-based alternatives.

Energy use for CM production was modeled based on two scenarios: one with conventional energy sources and one with a sustainable energy mix (50% solar, 50% on-shore wind, and heat from geothermal sources). To set ambitious targets for CM manufacturers, the study also eliminated the land-use change associated with soya feed production and reduced the emissions of gasses (such as ammonia and methane) for animal meat production. The model found that CM outperforms animal meat in both energy scenarios. Even if CM producers were to rely on just 30% renewable energy, their carbon footprint outperforms traditional beef and is on par with standard chicken and pork production.

The TEA studies modeled the future costs for electricity, heat, and water, as well as labor, equipment, and installation costs for CM plants. The CM facilities are projected to have capital costs of ~$450 million. However, the model points out the need for more affordable CM bioreactors. The study also projects that continual improvements in key cost drivers such as expensive cell culture mediums can reduce expenses by an additional 100X to 100,000X in the coming years. Under best-case scenarios, CM may compete with some animal meats in costs, but this will require ongoing innovations, the use of food-grade machines in production facilities, and other infrastructure and technology changes. Of course, ongoing investments are needed to bring these changes to life.

The study concludes by outlining several recommendations and areas of focus for CM producers to continue improving their costs and environmental footprints. Some of these include producing plant-CM hybrid products to benefit the environment; scouting for facilities that will maximize environmental benefits, such as factories located in areas with plenty of renewable energy; exploring new and innovative ways to reduce the costs of cell culture mediums; and improving tech knowledge gaps, such as oxygen transfer, cell medium recycling, and bioreactor design.

Overall, the study highlights the areas of focus that are likely to be most beneficial in reducing future costs and environmental impacts of CM production. While the LCA and TEA models in this study encourage confidence in the future of CM technology, the model leaves out major costs such as packaging and distribution. It also doesn’t account for the benefits of reduced antibiotic use, which comes with CM production. Switching to CM will prevent the use of ~200,000 tonnes of antibiotics that are projected to be used in animal agriculture by 2030. Future models that consider CM production more holistically can help paint a more accurate picture of the industry moving forward.

Author: Devatha Nair
Devatha P. Nair, Ph.D. is committed to raising awareness about our current food systems and the plight of animals around the world. She is a materials scientist based in Denver, Colorado.

Presenting meat-free or reduced-meat “default” food options can reduce meat consumption. This review considers whether and why this approach might work. 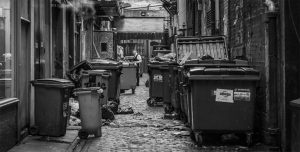 Waste is a major issue plaguing virtually every level of our food system. We look at the scope of the problem and why it matters for animal advocates.