The Development Of An Animal Protection Regime In China

China’s current animal welfare legislation is comprised of locally grounded principles and practices that are, in part, influenced by Western laws.
ABSTRACT ONLY Only an abstract of this article is available.
PEER REVIEWED This article has been peer reviewed.
EXTERNAL STUDY This is a summary of an external study.
Summary By: Ana Alvarelhão | Original Study By: Sima, Y. & O’Sullivan, S. (2016) | Published: December 15, 2020
Photo by Gregory Hayes on Unsplash

Rapid economic development in China is said to be one of the main drivers of animal abuse there, and researchers have linked it to the lack of regard for animal welfare legislation. However, attitudes are changing: a 500% increase in the number of dogs kept as companion animals in China, as well as increasing media coverage of animal abuse cases in recent years, have shown that the Chinese public are potentially becoming more active in their concern for animals.

There is currently a heated debate among Chinese scholars, animal rights advocates, lawyers, and media commentators about the creation of the country’s first comprehensive animal protection law. Advocates argue that a range of Western and Chinese ethical, moral, and religious theories reflect the obligation that humans have towards animals and that China is ready ideologically and materially to enact animal welfare legislation. They add that this would improve China’s international reputation and, therefore, improve its trade prospects. The opponents argue that, since they believe that humans are superior to animals, that animals are not sentient, and that animals don’t have any responsibilities, they do not deserve corresponding rights. They add that it would create “cultural conflict” and it would be impossible for animal welfare laws developed in advanced economies to be implemented in rural China.

In this study, China’s emerging animal protection law was examined and compared to western animal welfare legislation. Existing animal-related legislation in China is focused on protecting human interests in relation to the use and conservation of valuable animal resources in public health and food provision and safety. Considering the separation of animals into categories in this study — “Pet Animal”, “Economic Animal”, “Laboratory Animal”, “Wild Animal” and “Other Animal” — the list of China’s existing animal-related laws and regulations seem to only offer some protection to animals used in science (“Laboratory Animal”)  and wildlife (“Wild Animal”).

There were two animal anti-cruelty laws drafted after the “International Forum on Animal Protection Legislation in China” held in 2008. The first one was the Animal Protection Law of the People’s Republic of China (APL) which received backlash for its promotion of animal welfare when human welfare was being neglected or compromised. After this, the Prevention of Cruelty to Animals Law of the People’s Republic of China (PCAL) was drafted to replace the APL, in a way that was more accepted by the public. In both draft laws, “Economic Animals” received the most legal protection, followed by “Pet Animals,” “Other Animals,” “Laboratory Animals,” and “Wild Animals.” These last two categories of animals have received the least amount of legal attention since they are afforded a relatively high level of protection in China. Meanwhile, these draft laws remain proposals rather than official legislative documents.

Those two draft Chinese laws are based on Western animal welfare frameworks. In Western countries, the prevention of unnecessary suffering and duty of care are two major principles on which animal welfare legislation is based. Both committees that drafted the APL and the PCAL consulted Western legal frameworks to formulate their proposals.

However, China’s proposed animal protection laws are more than an importation of Western laws, since some distinctly and significant Chinese features can be identified. Some of these features are characterized by not adequately protecting animals from harm, like the lack of protection for “Pet Animals” from harm because of the focus on regulating pet-keeping to protect humans and other animals. Although the draft laws have banned the killing and consumption of “Pet Animals,” they allow the consumption of cats and dogs if bred as “Economic Animals.” In the PCAL, the definition of cruelty differs from the typical Western definition by including “deliberate action” and “serious negligence.” Since there is a problem with stray animals in China, both draft laws include regulations on the care and management of those animals.

Author: Ana Alvarelhão
Ana is an animal lover with a Master's in Economics. Whenever possible she volunteers for human rights, animal rights, and environmental movements. Her life’s work is directed towards contributing to making the world a better place for humans and animals. 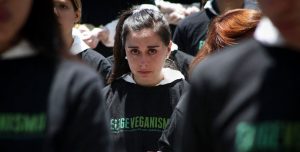 Welfare doesn’t just mean avoiding harms. This study looks at how to include the concept of a good life within certification programs for farmed animals.