Familiarity with the term "vegan" has made grassroots animal rights activism more viable and made it easier for larger organizations to embrace the term in their advocacy.
EXCLUSIVE Exclusive article or blog for Faunalytics.
Author: Nick Pendergrast | Published: February 15, 2018
Photo by Jo-Anne McArthur / We Animals

In lesson 2, I explored the way in which “animal rights vegan” organizations (those focusing primarily or exclusively on promoting veganism) are likely to generate fewer resources than organizations focusing on other tactics. As a result, they generally have to operate under more grassroots organizational forms, often being totally volunteer-run and not having any physical office space. Nevertheless, in this lesson I will explore the way in which the growing importance of the internet in campaigning and increasing awareness of veganism amongst the general public have meant that this form of activism is increasingly viable, despite these constraints.

In traditional, mainstream media such as widely watched television programs and popular newspapers, the animal welfare view of “humane” animal slaughter and “humane” animal products tends to dominate. More radical views fundamentally opposing animal slaughter and promoting veganism tend to be neglected. This could be partially due to fear that the more radical views will concern advertisers, many of whom are businesses based on animal exploitation.

The internet has provided a space where views that are not well represented in traditional media can be expressed in a cost-effective way. An example of this is where animal rights vegan organizations such as Animal Liberation Victoria and the Vegan Society of New South Wales used the internet to provide an alternative view on the live export issue. In 2011, there was widespread public outrage about the treatment of cows sent from Australia to Indonesian slaughterhouses, after footage of their slaughter was shown on Australian television. While the perspective of these animal rights vegan organizations was not given a voice in the traditional media coverage of the issue, these organizations were able to present their view challenging all animal slaughter and promoting veganism online, despite their limited resources.

The lack of traditional media coverage is still a significant constraint and the internet has certainly not created a “level playing field” between larger and smaller organizations. It is still possible for those with more resources to reach a larger number of people online. For example, organizations with more resources have greater capacity to more frequently pay to “boost” their posts on Facebook and reach more people. However, the internet has provided the opportunity to create a more level playing field between different types of organizations. It has allowed grassroots organizations to more easily spread their message beyond their location and reach more people.

The growing importance of the internet in campaigning for animals has meant that animal rights vegan activists can still potentially reach large numbers of people in a low-cost way through methods such as email and social media. Such methods are far cheaper than older forms of communication, such as letters and other printed materials. Online campaigning has also meant that organizations are more viable without physical office space. The decentralized nature of the internet means that individuals in geographically diverse locations can work together online, without the need to come together in-person in an office environment to distribute physical materials.

Another reason for the growing viability of animal rights vegan activism is the increasing coverage of veganism in more mainstream media as well as alternative websites and social media platforms. This trend may also help to explain why larger organizations are increasingly embracing the term “vegan” in their advocacy, as was covered in lesson 2. Patty Mark from Animal Liberation Victoria explained (in an interview for my thesis) that in the 1980s, her organization was concerned about even using the word “vegetarian” because it might put people off and marginalize the organization as being too radical. Things have certainly come a long way, with increasing familiarity with the term “vegan” in Australia and the United States.

Ethicist and animal advocate Peter Singer reflected on the growth of veganism:

“There has been a huge change regarding veganism. When [his book] Animal Liberation first appeared [in 1975], you couldn’t use the word ‘vegan’ without an explanation. The Vegan Society in Britain had only 300 members. There was a US vegan group that was small. There has been an enormous difference, an interesting difference. I was surprised – if you had asked me in 1975, I would have said I think vegetarianism would spread, and it would have been at a higher level in the public than now. I would have been surprised veganism caught on to the extent that it has.” (Singer, interview for my thesis)

The growth in mainstream media coverage is new territory for vegan messages: it is difficult for alternative ideas like arguments for veganism to break into mainstream media coverage. Scarcity of space (in print media) and time (in broadcast media) serve to marginalise different, new, and critical voices from the media. The growing use of the term “vegan” in the mainstream media suggests the public may now have sufficient familiarity with veganism for media to be more receptive to the topic. The figure below demonstrates the increasing number of times the word “vegan” is used in Australian newspapers. The data was obtained through searching the Factiva database for the term “vegan” in all Australian newspapers. 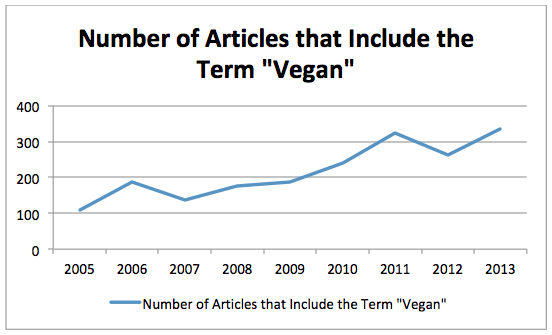 Further evidence that veganism is entering mainstream consciousness can be found from Google data. In 2011, for the first time ever, “vegan” was regularly getting a higher “search volume index” (number of searches) than “vegetarian,” as well as sometimes achieving a higher “news reference volume” (number of news stories). These trends have continued since then(see chart below), clearly demonstrating a growing number of internet searches for “vegan” (shown in blue) compared to “vegetarian” (shown in red) over time.

Lesson 2, “Are Grassroots Organizations Essential To Promoting Veganism,” is available to read here.

If you’d like to read more about the themes covered in this post, see Chapter 6 of my thesis: ”A sociological examination of the contemporary animal advocacy movement: Organizations, rationality and veganism” – it is available for anyone to read, you don’t need a university log-in or anything like that.

You can also listen to audio of a talk by Nick Pendergrast on this topic: just lesson 3 (2 minutes) or all 5 lessons (15 minutes).