What will it take to push U.S. farmed animal welfare legislation into stronger shape? A new Faunalytics blog looks at the State of the Union.
EXCLUSIVE Exclusive article or blog for Faunalytics.
Author: Faunalytics | Published: September 30, 2016
Photo by Flickr user maryshattock 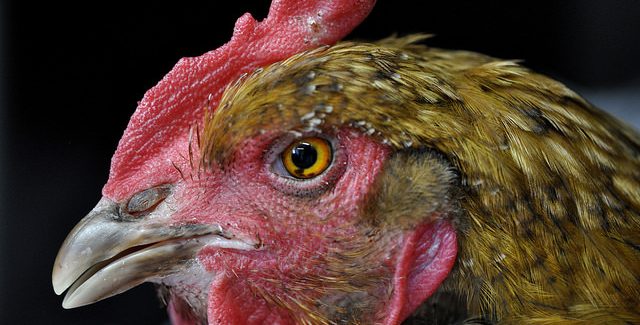 In November 2016, Massachusetts citizens will have the opportunity to vote on a ballot initiative that would prevent pigs, egg-laying hens, and veal calves from life-long confinement to gestation crates, battery cages, and veal crates, respectively. A majority “yes” vote on Question 3, called Massachusetts Minimum Size Requirements for Farm Animal Containment, would require that these animals have enough room to stand up, lie down, turn around, and extend their limbs. If successful, Massachusetts would join 10 other U.S. states that have already passed similar legislation, including Arizona, California, Colorado, Florida, Maine, Michigan, Ohio, Oregon, Rhode Island, and Washington. Notably, the Massachusetts proposal goes even further by prohibiting the sale of products from facilities that keep pigs, hens, and calves in extreme confinement systems.

Ballot initiatives can be one of the most effective ways for animal protection advocates to influence the development of state-level animal protection laws. The Humane Society Legislative Fund points out that between 1990 and 2010, advocates initiated 44 ballot measure campaigns and won 33 of them. Until these initiatives, there was no federal or state-level legislation that protected animals while on farms. Existing federal and state laws only regulate animal transport (the Twenty-Eight Hour Law) and slaughter (Humane Methods of Slaughter Act and state-specific slaughter laws).

The statutes resulting from ballot initiatives represent crucial milestones toward more humane treatment of farm animals. However, it’s also important to understand the statutes’ limitations so that animal advocates understand know how to build on and strengthen future legislation.

First, the majority of these statutes only regulate how animals are confined. This narrow scope has been criticized by some advocates and professional organizations, such as the American Veterinary Medical Association (AVMA). For example, in response to California’s 2008 ballot initiative, Proposition 2, the AVMA issued a statement expressing concern that the proposed legislation did not take into account all aspects of an animal’s welfare, such as its biological health and ability to express natural behaviors:

The best housing environments take into consideration all relevant factors, including: freedom of movement; expression of normal behaviors; protection from disease, injury, and predators; adequate food and water; and proper handling. Proposition 2 would clearly provide greater freedom of movement, but would likely compromise several of the other factors necessary to ensure the overall welfare of the animals…

Second, the legislation lacks specificity. The consistent but vague language in almost all of the statutes states that animals cannot be confined in a manner that prevents them from lying down, standing up, fully extending their limbs, and turning around freely. Individual animals vary in size, so what is enough room for one may not be for another. Laying hens suffer greatly, spending their lives in battery cages packed so tightly together that each bird has less space than a single piece of letter-sized paper.

The State of Washington was the first to define minimum space requirements for laying hens in their 2012 legislation. (They also require producers to provide birds with access to areas where they can engage in natural behaviors like nesting, scratching, and perching.) Massachusetts would be just the second state to quantify space requirements; their proposed legislation states that laying hens must have at least 1.5 square feet of useable floor space per hen.

While increased space in individual cages is certainly an improvement over conventional battery-cage systems, a rapidly growing number of companies in the U.S. and worldwide are committing to 100% cage-free systems. Most animal advocates consider this a positive alternative for the over 300 million hens in the U.S. who suffer extreme confinement. However, Candace Croney, an associate professor of animal behavior and well-being at Purdue University, points out that poultry farms with high “stocking densities” may have more issues with aggression, injury, and even cannibalization. Moreover, cage-free “upgrades” of existing farms could lead to a price increase for eggs. In response, food retailers could begin importing cheaper eggs from producers in states without farm animal welfare legislation. In his Forbes article “Shift to Cage Free is Likely to Disappoint,” Phil Lempert points out that there is also no USDA legal definition for “cage-free.” As such, producers and companies are essentially free to define their own standards, which lead to inconsistent food labels and confusion for consumers.

Despite these challenges, state-level legislation and commitments by major companies to implement animal welfare-friendly production systems are incremental yet significant steps toward the more humane treatment of animals on farms. That said, I would be remiss to ignore the elephant in the room: the debate among animal advocates over whether improving the living conditions of animals on factory farms ultimately hinders efforts to eliminate these businesses altogether. In his article “Vegan Feud,” James E. McWilliams argues that advocates’ staunch commitment to either of these competing ideologies weakens the animal protection movement.

He points to author Nick Cooney’s research, which shows that “seemingly minor improvements – say, larger cages – ultimately create pivotal ‘shifts in self-identity’ for both producers and consumers.” Individuals who purchase products from companies and farms implementing more humane production practices are “on a path toward veganism.” Similarly, companies and farms begin to self-identify and market themselves by these humane practices, leading to openness toward implementing even more improvements for animals.

In sum, McWilliams argues that advocates can endorse plant-based diets while supporting improvements to on-farm production practices. I agree. Ultimately, both approaches share the common goal of decreasing animal suffering. Moving forward, organizations and individuals who adhere to what has been considered competing approaches to advocacy would benefit by finding ways to work together.

On the legislative front, advocates might focus on developing specific and quantitative guidelines for confinement systems, which would involve amending existing legislation. In addition, perhaps identifying the species of farm animal most abundant in each state and then developing standards around controversial production practices specific to that animal is another approach. For example, four states – California, Ohio, Rhode Island, and New Jersey – have already banned tail docking of cows, which research shows has limited benefits for producers and decreases cow welfare. Other states with high numbers of dairy cows, such as Wisconsin, New York, and Idaho, should follow suit.

For more information about farmed animal welfare legislation in the U.S., check out the following sites (click the titles to link out):

Provides a comprehensive repository of information about animal law, including summaries and detailed legal analysis of specific animal issues, tables that compare laws across all 50 U.S. states, maps showing which animal-related laws exist in each state, and articles from legal journals on various animal topics.

Provides information about current animal protection-related ballot initiatives, including those aimed at increasing the welfare of farm animals.

Provides a side-by-side comparison of the farm animal welfare legislation passed in the European Union and in the U.S.

Lists all U.S. state that have passed legislation banning inhumane confinement with links to each states’ statute.

Includes the general animal protection and related statutes for all of the states, principal districts and territories of the U.S. and Canada.