Societal Change And The Welfare-Rights Continuum

This part 1 of a 4-part series discusses the theory of an overall "welfare-rights" continuum and how animal advocates can best make effective change for animals.
EXCLUSIVE Exclusive article or blog for Faunalytics.
Author: Faunalytics | Published: April 29, 2008

A recent essay by an Austrian activist with the organization Association Against Animal Factories provides an insightful analysis of vegan advocacy and the overall “welfare-rights” continuum relating to animal advocacy. This is part 1 in a 4-part series that will discuss and excerpt highlights from the essay.

For many years, those of us at Faunalytics have been encouraging “incrementalism,” which is the notion that to effectively persuade people to change, animal advocates should offer them small steps. This advice stems from the obvious fact that people generally do not change quickly; rather, they tend to alter their behavior incrementally, over a period of time. This is old news for social scientists, but it may be somewhat counterintuitive for those advocates who (quite understandably) seek as much change for animals as quickly as possible.

The problem, however, is that people – and public consciousness in general – change very slowly, and our strategies and tactics as advocates must reflect that reality. Effective persuasion means focusing on the behavior, motivations, and barriers of our target audiences, and NOT focusing so much on our personal end-goals as advocates. This idea of “incremental advocacy” was underscored in an essay by Martin Balluch of the Austrian group Association Against Animal Factories, published in March 2008. (Also available in our library)

Balluch provides a somewhat long, but incredibly articulate discussion of reform- vs. abolition-based animal advocacy. His overall assertion is that the two are inextricably linked in a “welfare-rights continuum” that makes it very difficult to achieve meaningful change through public education and persuasion. Instead, Balluch argues, widespread change for animals will only come through altering the system itself, by changing the balance of power and codifying animal-friendly laws and policies.

Regarding the welfare-rights continuum, Balluch argues (as I did in another post, The Death of Animal Rights) that the division over incremental changes and abolitionist approaches is moot, because the two are in fact part of the same continuum. He writes:

Don’t almost all people who end up living vegan start by either reducing meat or switching to free range animal products or at least by living vegetarian for a while which is also based on the use of animals? Doesn’t that mean that the fundamental philosophical difference between animal welfare and animal rights suggests a philosophical gap that isn’t actually there in psychological reality? …

Balluch further illustrates this continuum with a graphic (see below). He describes the “trough” that entraps most of society with respect to animal consumption and the “energy” that is required to sustain one’s existence outside of that trough. By passing laws, establishing policies, and making alternatives more convenient, animal advocates can help others move to the right of the continuum, arguably at a quicker pace than using persuasion. Balluch uses vegetarianism and veganism as his example, but the same would apply to any animal issue that has both public opinion and legislative/policy components. 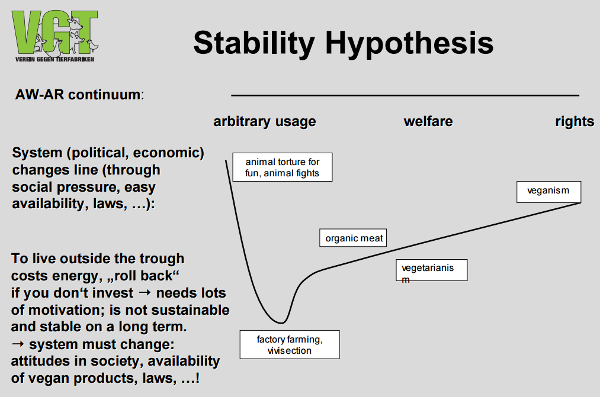 The way society is organized, the system changes the straight line continuum from unrestricted animal use via animal welfare to animal rights (above) to a structured surface (below). Single human beings can be considered as balls on this surface. Without any additional energy input, the balls swiftly roll into the trough. In our society that means consuming factory farmed animal products. Say, someone wants to enjoy watching illegal animal fights or the torture of animals, then s/he moves up the left branch. Since those activities are illegal and have a bad reputation, it takes a lot of energy to stay up there, this branch is very steep. You need to be highly motivated to sustain staying there. If you lose interest, you will soon roll back into the trough.

On the other hand, if someone develops towards using organic free-range animal products only, or even vegetarianism or veganism, then s/he moves to the right. It also goes upwards in this direction, and if you want to stay there, or develop even further to the right, then you need an increasing amount of energy input. Those, who cannot sustain that energy loss, who lose the motivation to invest so much and constantly swim upstream, will simply roll back. If you go with the flow, you end up square in the trough and consume factory farmed animal products like everybody else. It’s by far the easiest and least time consuming way to live.

Balluch’s arguments are strong ones in favor of both incremental advocacy and a shift of focus from public education to systemic change. Regarding veganism, Faunalytics has long suggested that a focus on meat reduction and elimination of the cruelest animal products would move many more people to the right of the continuum. This may even include arguments based health or sustainability in order to move people to the right based primarily on self-interest. The challenge then becomes effectively supporting those incremental changes so that people can sustain them and avoid reverting to “normal” levels of animal consumption.

In the end, however, persuasion and public education can only get animal advocates part of the way to our goal of ending animal cruelty. All of the research collected by Faunalytics suggests that changing hearts and minds is not only a slow process, but it may also have an upper limit. The “tipping point” that many advocates refer to may work for selling Hush Puppies (as mentioned in Gladwell’s book), but the dynamics are very different when persuading people to alter very entrenched behaviors, like consuming meat. In my next post, I’ll discuss this “persuasion problem” in more detail and also highlight more of Balluch’s excellent essay.

As always, your comments are welcome.