Shipping costs are one of several key factors that can affect the volume of ivory smuggled around the world.
ABSTRACT ONLY Only an abstract of this article is available.
PEER REVIEWED This article has been peer reviewed.
Summary By: Faunalytics | This is a summary of an external study | Published: February 7, 2017
Photo by Flickr user usfwsmtnprairie 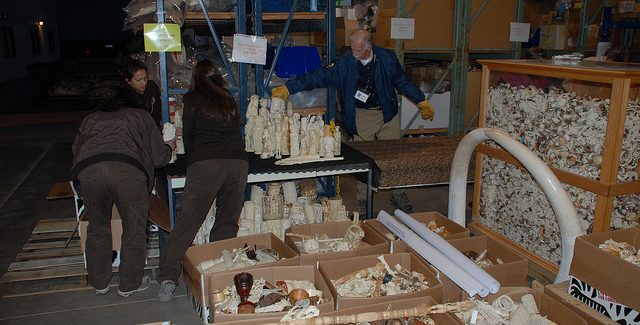 Poaching for ivory continues to devastate African elephant populations. Despite the stronger presence and militarization of wildlife rangers, these elephants are still killed in the thousands each year. According to the United Nations Environment Programme (UNEP), illegal trafficking in ivory has more than doubled since 2007 and appears to have accelerated since 2009.  The Convention on International Trade in Endangered Species of Wild Fauna and Flora (CITES) reports a surge in ivory seizures over 100 kg, a number supported by data from wildlife losses. What accounts for this increase in seizure rates? Can it be attributed to consumer demand for ivory, which has more than doubled in recent years? Or could there be other factors at play?

Governance, enforcement, per capita wealth, and a host of other factors affect the demand for black market products. But for ivory  in particular, researchers found that the role of shipping costs has been overlooked. While ivory is exported to markets all over the world, since 2008 all shipments over 500 kg have been destined for Asia. The hypothesis is that shipping costs, especially along the main shipping corridors between Africa and Asia, impact levels of smuggling activity. The researchers analyzed data from several sources for 16 annual observations. They found that shipping costs are indeed correlated to smuggling levels, with the strongest effect for shipments over 1,000 kg. Likewise, they observed this trend over the entire study period, not just in recent years.

The authors provide varying explanations for how transportation costs may fit with a variety of other supply and demand dynamics of ivory, but nothing is certain. However, they conclude that costs “appear to be highly relevant for the volume of trade.” This means that elephant advocates, conservationists, and government agents need to be cognizant of shifts in shipping costs and adjust their work accordingly. If shipping costs drop, criminal organizations become bolder and try to send larger shipments, even using shipping containers to do so.

National parks and nature preserves bring in money to help pay for conservation efforts, but human trafffic also causes disturbance and harm to local wildlife. For some species, ecotourism can mean the difference between survival and extinction.