Elephants in captivity have a low reproductive success rate. Female elephants who were injured, used in religious events, or kept locked up had even lower fertility rates.
ABSTRACT ONLY Only an abstract of this article is available.
PEER REVIEWED This article has been peer reviewed.
EXTERNAL STUDY This is a summary of an external study.
Summary By: Faunalytics | Published: June 5, 2014
Image by Pixabay user Republica

Captive Asian elephant reproduction is said to be important to preserve declining wild populations, but success rates are low. This study analyzed the reproductive and stress hormone levels of dung samples from elephants in south Indian zoos to better understand reproductive cycles. Female elephants who were injured, used in religious events, or kept chained in social isolation most of the time had less regular fertility cycles. Stress hormones were slightly higher during musth (a cycle of heightened aggression and sexual activity) in 3 of the 4 male elephants, but the reasons for this were unclear.

“Asian elephants in captivity need immediate attention to be bred so as to meet the increasing demand for captive elephants and to overcome the dependence on supplementing the captive stock with wild animals. Unfortunately, captive breeding programs across the globe have met with limited success and therefore more effort is needed to improve breeding in captivity. Endocrine profiling of reproductive hormones (progestagens and androgens) and the stress hormone (glucocorticoids) could facilitate better management and breeding strategies. In the present study, we investigated reproductive and stress physiology of 12 captive Asian elephants for 10–27 months using a non-invasive method based on steroid analysis of 1700 elephant dung samples. Most of the elephants were cycling regularly. Males during musth showed increased fecal androgen metabolite concentrations and exhibited a slight increase in fecal glucocorticoid metabolite levels. Elephants used in public festivals and processions showed significantly increased in faecal glucocorticoid metabolite levels. The results indicate that captive elephants require periodic health care, better husbandry practices and scientific management for sustainable captive population.”

Through measuring hormones found in fecal matter, researchers have found that African elephants residing inside protected areas had significantly lower levels of stress. 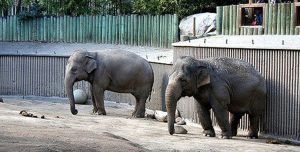