This study examined the sale of fish products labeled with a three-tiered 'sustainability' index, producing mixed results and a 15% overall decline in sales.
ABSTRACT ONLY Only an abstract of this article is available.
PEER REVIEWED This article has been peer reviewed.
Summary By: karol orzechowski | This is a summary of an external study | Published: September 5, 2015
Photo by Flickr user istolethetv 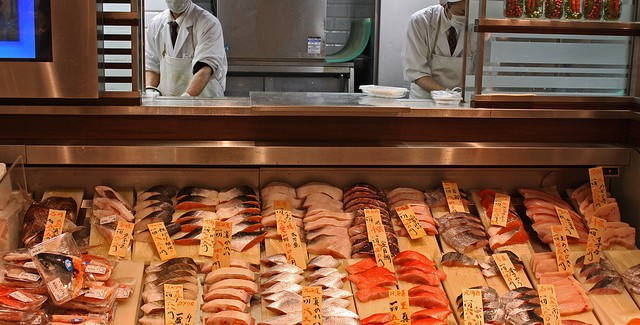 The global demand for fish products is rising alongside the growing consumption of meat. Overfishing has run rampant for many decades, and illegal fishing has created a precarious situation in our waters. Aquaculture and fish farms have emerged to try to keep up with the demand for fish, but the state of much of the world’s fish stocks are insecure. Population growth, alongside increasing per capita consumption, is expected to drive the demand for fish well beyond current levels, and far above the existing provision of aquaculture.

To try to mitigate some of the negative impacts of fishing, many conservation groups have turned to labeling schemes or “market-based mechanisms” to inform consumers of the types of  fish that may be “better” to consume in relation to fishing practices. This system has been thought to have had some success in the past, with “dolphin safe” tuna being one example of an eco-label that has had widespread use and was seen to impact consumer behavior. The idea behind eco-labels is simple: consumers who have more information will make better purchasing decisions. However, these products are usually labeled in a way that shows consumers which foods are “the right ones” to buy. “Dolphin safe” tuna labels show which tuna is certified, but there aren’t labels indicating negative fishing practices on the non-dolphin safe varieties. The effectiveness of eco-labels is debated and there is no consensus over whether they are truly useful.

This paper looks at the effectiveness of a labeling scheme called “FishWise Advisory” which uses a traffic light system for labeling fish products. Green means that an item is “best choice,” yellow indicates “proceed with caution,” and red shows that it is the “worst choice.” The researchers gathered data from a regional supermarket chain on the west coast of the U.S. The supermarkets were based in and around the San Francisco area, a region known to be environmentally aware and its population often health-conscious.

The researchers hypothesized that the sales of the green items would increase, sales of the red products would decrease, and sales of the yellow products would have some proportionally smaller change in one direction or the other. Instead, what they found was remarkably different. There was a significant decline in the overall sales of fish products (15.3%), which was driven primarily by an even greater decline in the sale of yellow labeled items (41.3%). Additionally, the study found that sales of the items with red or green labels were not affected by the color coding. The researchers struggle to explain why this happened, as the data only shows the sales figures and not the psychology behind the consumers’ purchasing decisions. It could be that “the lack of an impact on the sale of green and red labeled seafood include consumers’ prior information and assumptions, and like yellow labeled sales, the availability and pricing of desirable substitutes.” It may also be the case that consumers who purchased red items “may not derive any direct utility from consuming environmentally sustainable seafood, and in fact, might experience significant dis-utility if asked to purchase a substitute.” However, this is just speculation based on various economic theories.

For animal advocates, the results present two potentially interesting outcomes in relation to labeling. The first is that the presence of labels in and of themselves is enough to reduce the demand for particular animal products. The second is that this three-tiered system does not necessarily change behavior at each end of the spectrum. While this study did not look at labeling as a way of encouraging consumers not to buy fish, it does show that labeling in and of itself can have a significant impact on consumer behavior. For advocates who are especially interested in market-based mechanisms and incentives, this study and its results worth following up.

Hallstein, E., & Villas-Boas, S. B. (2013). Can Household Consumers Save The Wild Fish? Lessons From a Sustainable Seafood Advisory.  Journal of Environmental Economics and Management, 66(1). pp. 52-71. 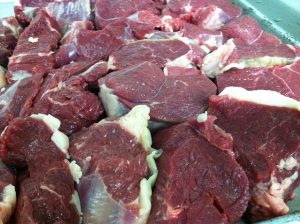 Repugnance as a Constraint on Markets

In a unique paper exploring the pressure of "repugnance" on economic markets, researcher Alvin E. Roth shows how people's distaste for certain transactions can have a serious constraint on different types of economic activity. Outlining a wide range of examples, including paying for organ transplants, the "game" of "dwarf tossing," and the sale and consumption of horse and dog meat, Roth shows how repugnance is culturally engrained and can sometimes change over time given certain circumstances, or become further entrenched. The paper offers interesting theoretical information for animal advocates who work on issues where "repugnance" may feature.

The latest study from Faunalytics takes a deep dive into attitudes towards chickens and fishes at an international level, including translated resources in Hindi, Portuguese, and Simplified Chinese.