In this blog, we give a comprehensive update to our Global Slaughter Charts, and explore trends in the UN FAO data over the past 60 years.
Author: Bas Sanders | Published: July 29, 2020
Photo by Adolfo Félix on Unsplash

Almost two years ago, we published a series of blogs that documented how many animals are slaughtered for food every year based on United Nations data. This blog offers an updated and improved version using the latest data, and includes two additional years worth of numbers. In terms of improvements, we’ve added a measure for fish, we’ve introduced a new chart that helps to better visualize the data, and we’ve condensed all of the information into a single blog post, as opposed to a blog post per animal group.

The animal groups we focus on are cows, chickens, pigs, sheep, and fish. The data for land animals is part of the FAOSTAT database from the Food and Agriculture Organization (FAO) of the United Nations. Meanwhile, the data for fish was pulled from the database “Global Production by production source 1950-2018”, which can be found in FishStatJ, the software for fishery and aquaculture from the FAO. For land animals, we focused on the number of animals that were slaughtered for their meat. In the FAOSTAT database, this corresponds to the item “Meat, {Animal group}”. The unit for land animals is hence the number of animals slaughtered. This is not the case for the fish, who are measured in live weight (units are either tonnes or kilograms). To avoid confusion, we’ve opted to include a separate time series for fish, which can be found in the second tab in the interactive line charts.

Noting that chickens are measured in thousands, it is apparent that they are by far the most slaughtered land animal, followed by pigs, sheep, and cows. Again, note that we cannot compare the number of slaughtered fish with the number of slaughtered land animals because the fish used for production are measured in live weight — we would have to estimate an average production fish weight across all species. All of the absolute time series seem to have an upward trend, although the time series of fish seems to be flattening since around 1990. One might argue that these upward trends are due to increasing population, and we can check this claim by plotting the time series per capita.

Through this, we can observe that only chickens and pigs keep their upward trend, whereas sheep and cows now have a clear downward trend. Meanwhile, the time series for fish first goes up, but has had a steady downward trend since 1990.

Having observed that large parts of the worldwide trends were caused by increases in the number of slaughtered animals in Asia, and the fact that Asia’s population grew the most (in absolute number) over the considered period, it is worthwhile to investigate the per capita stacked area graph.

Looking at the stacked area graph for cows, we observe that by far the most cows are slaughtered per capita in Oceania. This number is decreasing for all continents except Asia, where there has been a slight increase. From the chicken graphs, we learn that in all continents more chickens were slaughtered per citizen. It is noteworthy that in Oceania, Europe, and the Americas, more chickens are slaughtered per capita than in Asia and Africa. Considering the graph for pigs, it becomes apparent that the big contribution of Asia to the increase in the number of slaughtered pigs worldwide was indeed due to its population growth; the number of slaughtered pigs for the average Asian citizen has only grown slightly. The time series for Oceania, Europe, and the Americas seem to be fairly stable and the one for Africa has an upward trend.

The same conclusion about Asia’s contribution to the absolute number of slaughtered animals can be made for sheep. The per capita numbers for Europe, Asia, the Americas, and Africa are overshadowed by those of Oceania. All continents seem to have a downward trend per capita except for Asia.

Lastly, we look at the stacked area graph for fish. The per capita amount of fish that were used for production in the Americas is striking: it is highly erratic, whereas in the other continents there seems to be a steadier trend. The time series for Oceania, Europe, and Asia slightly trend upwards, and the time series for Africa seems stable.

We can further deconstruct these time series by breaking down continents into countries. To depict the distribution of the number of slaughtered animals over the different countries as clearly as possible, we opted to use interactive percentage maps.

It is again interesting to investigate whether the countries that have a high absolute number of slaughtered animals also have a high per capita number. We, therefore, plot the same graph again but now correct for population size.

A disadvantage of using these percentage graphs is that they mainly give a good idea of the top tail of the distribution of countries. We are therefore also including interactive world map graphs (absolute and per capita numbers) so that readers can easily find the data for a specific country. One can also hover over the legend distribution to see which countries are in that specific part of the distribution.

The FAO is unique in being able to provide global scale statistics on animal agriculture, but some advocates have raised valid questions about the overall accuracy of their statistics. A critique of FAO stats can be found here. Still, when discussing global slaughter, more reliable official data can be hard to come by. Overall, the numbers give advocates a relatively solid longitudinal picture of how many animals have been consumed around the world for the past 60 years or so, and general trends in different kinds of consumption. This information can be used in countless ways to inform advocacy campaigns, from local and regional campaigns, to broader global efforts. 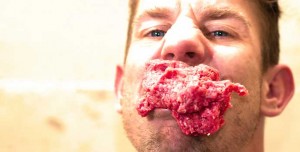 As more evidence emerges that eating meat damages the environment, affects personal health, and causes suffering to animals, some people are finding it increasingly difficult to justify consuming it. This study looks at the psychological mechanisms that people employ to solve the "meat paradox" - continuing to eat meat despite a growing body of evidence that action should be taken to the contrary. The researchers find that, among the various techniques used, people most often employ a strategy that frames meat eating as natural, normal, necessary, and nice.