There is a strong legal case for giving chimps used for biomedical research the same rights as prisoners.
ABSTRACT ONLY Only an abstract of this article is available.
PEER REVIEWED This article has been peer reviewed.
Summary By: karol orzechowski | This is a summary of an external study | Published: July 30, 2015
Photo by Flickr user tomconger 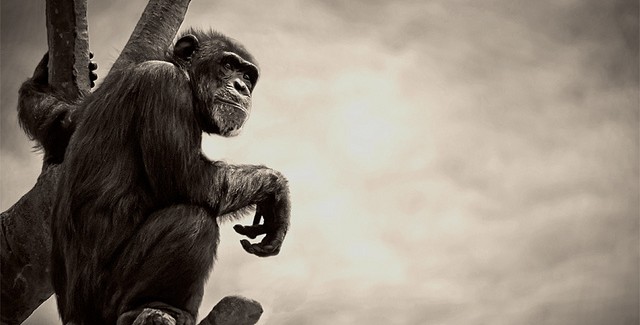 What do we mean when we talk about our fight for “animal rights”? There’s a common misconception that animal advocates wish to give nonhuman animals exactly the same rights as humans, but this isn’t the case. Though there are many facets and nuances to animal rights philosophy, for many of us, this movement aims to ensure that animals are able to live their lives free from pain, suffering, and without negative human intervention. Advocates recognize that nonhuman animals have their own interests and desires, and that individual personalities exist. There is a difference, however, between acknowledging that nonhumans have “personalities,” and fighting for their personhood. The fight for the personhood of nonhumans has generally focused on animals that are the most similar to humans, namely great apes, such as chimpanzees. This has manifested itself in animal advocacy campaigns such as the battles to grant personhood rights to great apes and dolphins.

In a short interview published in the New Scientist, lawyer Steven Wise describes how the fight for nonhuman personhood took an interesting turn recently in relation to Stony Brook University in New York, which keeps two chimps confined for research. Wise filed a petition against the university under a habeas corpus statute, generally used to pass judgment on whether the detention of a prisoner is lawful. The university will have to successfully argue that Hercules and Leo, the two chimps held there, are legal things rather than persons in order to win their legal fight. The chimps are being used by the anatomy department to study the evolution of locomotion. They are confined indoors, which Wise argues “goes against the US National Institutes of Health’s guidelines that the few chimpanzees that remain in research are to be kept in groups of not fewer than seven, a mix of males and females, in a natural-like environment.”

It is interesting that this legal avenue is being pursued, rather than seeking the application of existing animal welfare laws. The explanation from Wise is that even under U.S. animal welfare law, nonhumans are treated as “things,” and “don’t have inherent rights. They are only important to the degree that they are important to a legal person. They are essentially slaves.” Wise is putting forward the argument that Hercules and Leo are autonomous and self-determining individuals, not objects, because courts show “the utmost respect for autonomy.” There are already precedents for people succeeding with this justification when they have rejected medical treatment, and Wise is seeking for the chimps to have their autonomy respected in a similar sense. However, he clarifies that he is not asking for human rights for chimps, but rather “chimpanzee rights for chimpanzees, looking to understand what the most fundamental interests of chimpanzees are and giving them rights to protect those interests.”

As evidenced from this short interview, the case is compelling for various reasons, and has garnered media attention across many other sources. As this is “new [legal] territory” in the U.S. and there have never been other cases about animals that have progressed so far, the outcome is still uncertain. Astute animal advocates might notice, and be concerned, that the focus on housing guidelines by the NIH might lead to an outcome more focused on welfare than rights, but, nevertheless, the case is still promising. The courts are finally starting to consider the rights and interests of nonhuman animals as legal persons, reflecting part of a larger shift in societal thought, and a positive outcome is likely to impact advocacy for years to come.