Captivity and laboratory testing can have serious negative psychological and physical effects on retired chimps, even after they are moved to a sanctuary.
ABSTRACT ONLY Only an abstract of this article is available.
PEER REVIEWED This article has been peer reviewed.
Summary By: karol orzechowski | This is a summary of an external study | Published: September 7, 2015
Photo by Flickr user animalrescueblog 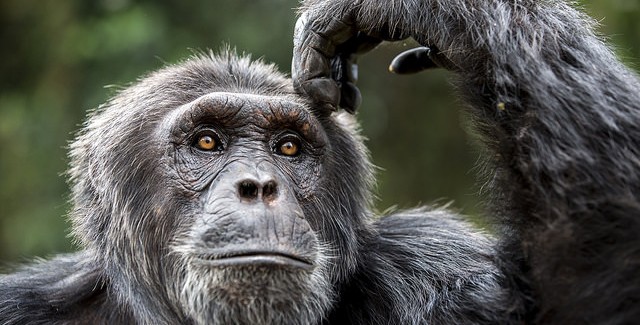 The use of animals in biomedical research is a controversial topic that brings up numerous ethical questions. The animals often undergo painful and stressful procedures and tests as part of the experiments. In addition, many animals suffer the mental and physical effects of being kept in captivity, and often face deprivation through the laboratory setting, sometimes induced deliberately as part of tests. The use of non-human primates in biomedical research has been widely debated around the world. In 2013, the U.S. decided that several hundred of the remaining chimpanzees used in labs across the country would be relinquished to sanctuaries, though 50 were kept in laboratories for further research. Ten years earlier, in 2003, the Dutch parliament fully prohibited the use of chimps in research, and 130 chimps were subsequently retired from laboratories.

Of these 130 chimps in the Netherlands, 28 could not be housed in a regular sanctuary setting. These individuals had been used predominantly for experimental virus studies and had also been separated from their mothers at birth. Having spent a great deal of their lives living in small social groups or solitary confinement, the 28 chimps had to be given special treatment, and due to this, researchers decided to observe them in the sanctuary to see how they adjusted to their new settings. The types of procedures and living conditions that these chimps had endured were particularly difficult, and adjusting to sanctuary life (not to mention the transfer to the sanctuary) was a stressful endeavor. For such sensitive animals with this life history, any change in environment can be tremendously difficult.

Before the study, researchers expected that the chimps would “initially display behavioural signs of stress and increased abnormal behaviour,” but that after some initial months of acclimatizing to the sanctuary, “relocation was expected to have positive effects on social behaviour and to reduce the performance of abnormal behaviour in these chimpanzees.” Upon relocation, the chimps were left in their previous social groups that had been formed between 4-11 years prior to the move. Few studies have looked at the long term adjustment of non-human primates in sanctuaries, and so this research was wading into some uncharted territory.

Yet, after a great deal of observation, some of the findings were counter to the original hypotheses. The two main outcomes were that the chimps performed “less aggressive and less submissive behaviour and more allogrooming.” This suggested that introducing the chimps to the more complex environment of a sanctuary “evoked significant behavioural changes, even though the enclosures at the sanctuary did not contain naturalistic elements like trees and bushes.” However, it was additionally discovered that in this new setting the group of chimps “also performed significantly more abnormal behaviour.” The authors were limited in some ways through their research methods, for example, they made “no distinction… between different abnormal behaviour types, and that behaviour was only counted, i.e. no durations of behaviour types were registered.” However, because the same methods of observation were used at the laboratory and the sanctuary, it allowed for a good comparison of behavior between the two settings.

This study shows that the relocation of chimps with a history of maternal and social deprivation to sanctuary enclosures enhances long-term social interaction among stable groups of captive chimps. Yet, the continued presence of abnormal behaviors means that sanctuaries need to do their best to develop rehabilitation programs for social and natural behaviors. This could take on many different forms, from providing “cognitive challenges and natural-like diets that contain more fibres to increase foraging time,” to intervening with the chimps’ psychological problems through therapeutic medicines. For advocates, this study is a reminder of the toll that laboratory life takes on non-human animals, and shows that our fight to ensure a better life for lab chimps doesn’t end at their retirement.

Kranendonk, G., & Schippers, E. P. (2014). A Pilot Study on the Effects of a Change in Behavioural Management on the Behaviour of Captive Chimpanzees (Pan troglodytes). Applied Animal Behaviour Science, 160. pp. 127-137. 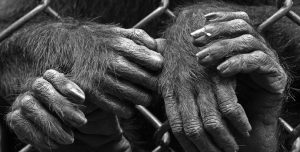 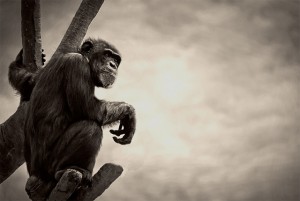