Review of game meat sales using DNA barcoding shows that nearly 20% is mislabeled and nearly 10% contains "legally supplied" endangered species.
ABSTRACT ONLY Only an abstract of this article is available.
Summary By: Jen Wyglinski | This is a summary of an external study | Published: December 13, 2015
Photo by Flickr user diva3 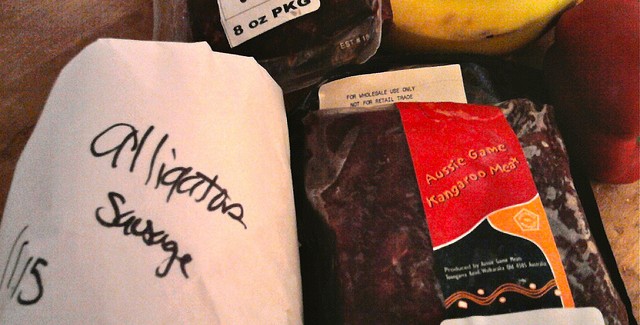 The game meat industry, encompassing the slaughter, distribution, and sale of meat from wild animals such as alligator, elk, and kangaroo, represents a small but growing specialty market in the United States. While the market is regulated by both the U.S. Department of Agriculture and the Federal Drug Administration, there are no mandatory inspection services in place to determine if final meat products are what they claim to be, meaning that game meat products could easily be mislabeled.

This study, from Food Control, sought to investigate how frequently game meat products sold in the United States are mislabeled, and also determine if any mislabeled products contain meat from endangered or threatened species. The researchers obtained 54 samples of commercially-sold game meat encompassing 22 animal species from four online retailers. After extracting and comparing DNA sequences with records from the Barcode of Life Database, they found that 10 of the 54 samples, or 18.5%, were potentially mislabeled. Interestingly, while six of the mislabeled products contained meat worth less than the product label, four of them contained meat worth more. The researchers concluded that mislabeling likely resulted from both intentional attempts at financial gain and unintentional product mishandling.

The researchers also found that while none of the mislabeled products included meat from endangered or threatened animal species, one of the properly labeled and legally sold products was lion, a species listed as threatened by the International Union for Conservation of Nature but not the Federal Register, the system used to regulate species eligibility in the game meat industry. As this study was one of the first to investigate game meat mislabeling in the United States, the authors recommend conducting additional market research to further explore mislabeling trends. They also suggest that policies regulating the game meat industry should be amended to deter both intentional and unintentional labeling errors.