Can profiling individual cat predators be a useful method for mitigating the impacts of cat predation on wildlife?
ABSTRACT ONLY Only an abstract of this article is available.
PEER REVIEWED This article has been peer reviewed.
Summary By: karol orzechowski | This is a summary of an external study | Published: January 2, 2016
Photo by Flickr user nevilleslens 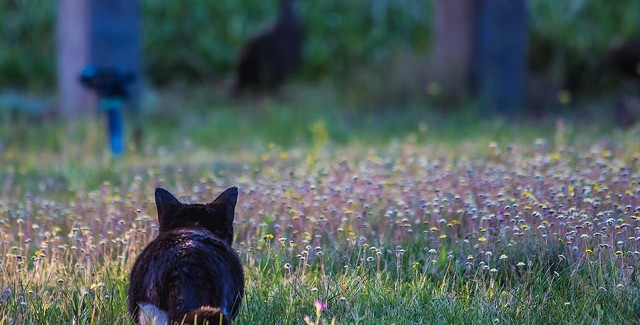 The subject of cat predation and its impact on birds is something we’ve covered before. Whether it’s using “kitty cams” to quantify cat predation, looking at putting “BirdBeSafe” collars on cats to reduce predation, or meta research on the impact feral cats have on bird populations, we have shared studies that approach the topic from numerous angles. The issue is an important one, because birds and other small prey are indeed killed by free-roaming cats. But in a sad cycle of death, humans kill free-roaming cats due to concerns about predation or disease. Understanding the scale of cat predation can help us create and implement sensible policies. Human interventions should seek to balance the interests of cats and wild prey animals — and finding that balance requires having good data.

Of course, not all cats are the same, and it can be bad science to simply refer to cats as a broad group, without recognizing that different cats may have different rates of predation. When it comes to feral cats, using blanket management techniques on the population as a whole may be completely ineffective in addressing predation of certain species. For “native top-order predators,” some environmental managers have used something called “predator profiling” to identify certain individuals that are “believed to present disproportionately greater risks than the general population of predators.” It’s believed that those individuals can be specifically targeted for “control” in a more effective way than blanket programs that try to control an entire population. Predator profiling, however, has not been widely used for smaller animals.

In this study based out of Australia, researchers wanted to determine “whether certain individual cats are disproportionally responsible for predation impacts on target wildlife species.” To do so, they conducted forensic reviews of “multiple lines of evidence” around individual feral cat predation events, to see if predator profiles may emerge from the data. Across twenty reports and studies, they found twelve instances where individual feral cats were thought to be responsible for what they call “catastrophic predation,” five instances where cats were known to attack and kill challenging prey, and three instances where cats had the potential for catastrophic impact, but no impacts were recorded. They note that “cats responsible for catastrophic predation, like other ‘problem’ predators in human–wildlife conflict, often require inordinate skill and effort to control.” When it comes to feral cats, however, these “control” options are sometimes lethal.

For both outdoor companion and feral cat advocates, this study provides interesting information and also presents a complicated case. Obviously, feral cat advocates would oppose using lethal methods to “control” specific predators. But there may be an intersection where cat advocates and wild animal advocates can work together to find acceptable solutions. If it’s possible to use the type of specialized monitoring of free-roaming cats identified in this study to identify the most prolific wild animal predators, then it may be possible to capture and perhaps relocate or find indoor homes for these cats. If cat and bird advocate shave a mutual interest in helping all animals, then we should be able to find non-lethal and minimally invasive approaches to help control feral and free-roaming cats in ways that mitigate wild animal predation.

Cats Vs. Birds: Researching The Research

Peter J. Wolf demonstrates how to evaluate the validity of research with his in-depth critique of a study on bird predation.