Among the signs that captivity is harmful for orcas, a study finds that approximately 1 in 4 exhibit “major” to “extreme” mandibular coronal tooth wear.
ABSTRACT ONLY Only an abstract of this article is available.
PEER REVIEWED This article has been peer reviewed.
Summary By: Faunalytics | This is a summary of an external study | Published: November 13, 2017
Photo by Flickr user lolilujah

Studies on modern cetaceans—which include whales, dolphins, and porpoises—show that their teeth serve very specific purposes. And, like other animals, their teeth relate to their species’ evolution. Cetaceans mostly use their teeth for catching and holding prey rather than for chewing food. Orcas in particular may also use their teeth to “mechanically reduce” their prey before consuming it fully.

Like other animals, including humans, poor dental health can have serious consequences for orcas. Free-living orcas may develop poor-dental health in older age. They generally eat a diverse diet that is related to their ability to move. Orcas in captivity don’t have such freedom to move. And rather than hunting for food themselves, staff feed them a diet by hand that may exclusively include dead fish, dead squid, and gelatin (which is given to “mitigate chronic dehydration”). Despite a lack of contact with prey, many captive orcas have extensive wear and tear on their teeth. Why?

Researchers completed a review of orca dental health between 2013 and 2015. They used high resolution digital images of 29 captive orcas, to explore why and how captive orcas experience poor dental health. They found some type of tooth damage in all the whales. They found various pathologies to be connected to an animal’s duration in captivity. In their sample, 45% of the whales exhibited moderate mandibular coronal tooth wear. And an additional 24% showed major to extreme wear.

These data, though disheartening, are good fuel for anti-captivity advocates, and can be used to raise awareness of captivity issues among the general public. 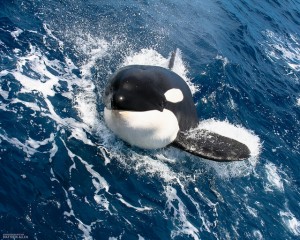